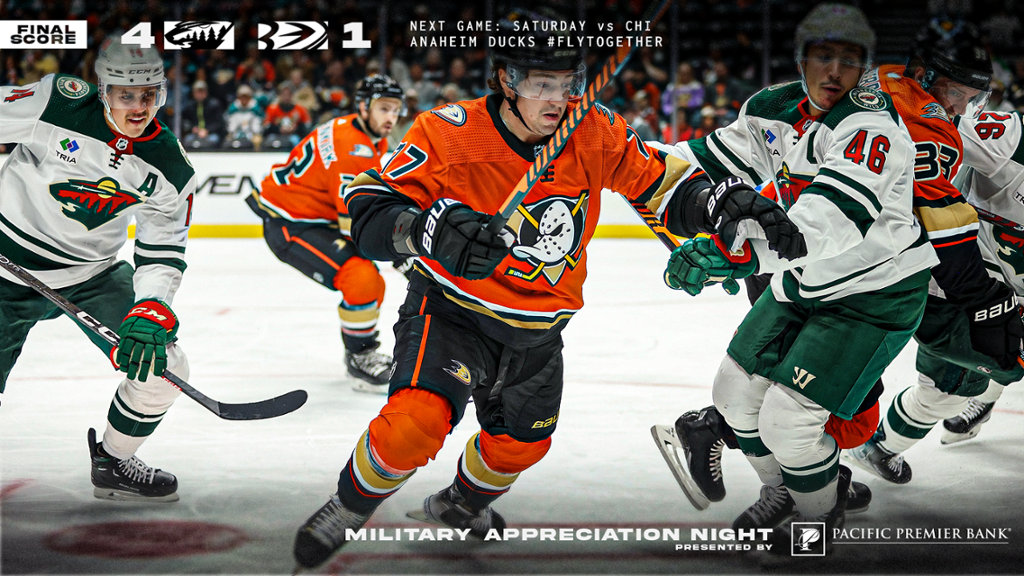 Regenda scored the lone goal for Anaheim, giving the Ducks the lead early in the second period. Dmitry Kulikov and Frank Vatrano tallied assists. John Gibson made 35 saves in his 11th start of the season.

The teams skated to a scoreless first period full of back-and-forth play but not exactly stocked full of scoring chances on either end. Silfverberg had Anaheim’s best look in the game’s initial moments on a one-timer from the slot, but Gustavsson answered with a pad save.

Gibson did his best work of the early going with a breakaway denial of Kaprizov. The Ducks netminder finished with 15 stops in the opening frame.

Anaheim appeared to take the night’s first lead early in the second on yet another remarkable display of puck-handling wizardry by Trevor Zegras. With the Ducks on the attack in the offensive zone, Zegras got to a loose puck behind the Minnesota net, scooping it up onto the blade of his stick and tucking it under the crossbar from below the goal line lacrosse-style.

Unfortunately for Anaheim and the thousands of Ducks fans who had just witnessed a goal previously scored only five times in NHL history, the stunning marker would be soon nullified by a successful Minnesota offside challenge.

Had it stood, the goal would have made Zegras the first player in league history to accomplish “The Michigan” (originally popularized by University of Michigan forward Mike Legg in 1996) three times, passing Carolina’s Andrei Svechnikov. Last season, Zegras scored two such goals, in Montreal and Arizona, in addition to his jaw-dropping, never-before-seen alley-oop pass over the net.

Despite that major letdown, Ducks fans would soon have another reason to celebrate when Regenda buried his first career NHL goal. The Ducks gained the blue line with Vatrano carrying the puck down right wing. The first-year Duck drifted into the faceoff circle, pivoting away from the Minnesota defense and looking for a trailer, which he found in Regenda hustling through the middle of the ice. Regenda took the pass and let his wrist shot fly from the top of the circles, beating Gustavsson over the glove.

Video: MIN@ANA: Regenda wires in a shot for NHL first

Regenda, who signed with Anaheim in June after leading all 23-and-under players in the Slovakian Extraliga with 39 points in 43 games last season, was recalled from San Diego (AHL) Wednesday with Adam Henrique out for the birth of his first child. Regenda now has three points (1-2=3) in his first six NHL games and also found the scoresheet in all of four of his appearances with the Gulls (2-2=4).

Minnesota would respond just three minutes later, tying the game on Kaprizov’s power-play goal. With the Wild on the man advantage, Matt Boldy took a low shot from the right point, trying to get it through bodies in front of Gibson. Instead, his bid was tipped by Kaprizov before riccochecting off Kulikov and past Gibson, leveling the score at one headed to the third period.

The Ducks have allowed a power-play goal in nine straight games and a league-most 19 on the season.

Anaheim’s Kevin Shattenkirk left the game following the middle frame with a lower-body injury and did not return.

The Wild would take their first lead of the night less than two minutes into the final stanza of regulation, taking advantage of a Ducks defensive zone breakdown. Mason Shaw had the puck behind the net, frantically trying to evade the check of Cam Fowler. Pressured into the corner, Shaw spun away from Fowler and flung a puck towards the net. Winger Connor Dewar found himself in the perfect place when the puck did arrive, redirecting it to Dumba alone in the slot for a tap-in goal.

The goal was Dumba’s first of the season and 76th of his 10-year NHL career. Dumba is second in Wild franchise history in goals among defenseman, trailing only teammate Jared Spurgeon, and third in points.

That goal would prove the difference as Anaheim would be unable to pull even, in part thanks to a crucial insurance tally off the stick of Kaprizov.

A night after Wild head coach Dean Evason publicly bemoaned a lack of power plays in the club’s 1-0 loss to the Kings, Minnesota would get six man advantage opportunities against Anaheim. Two of those would power plays would come shortly after the go-ahead goal, giving the visiting Wild a 5-on-3 they would convert for a two-goal cushion.

Kaprizov scored that backbreaking goal for his second power-play tally of the night, taking a pass from Mats Zuccarello behind the net and tucking it inside the post before Gibson could slide across his crease.

Minnesota would put the game away on a bad bounce for Anaheim with Cramarossa getting gifted an empty net. After a couple of close calls for the Ducks nearly brought the hosts back within one, the Wild dumped the puck into the Ducks zone. Gibson went back to play it, sliding a pass to Kulikov behind the net. Kulikov then tried to rim the puck around the boards, but his clearing attempt took an odd bounce, carroming right into the slot for Cramarossa, who slammed it home while Gibson rushed back to his crease.

Cramarossa, Anaheim’s third-round pick in 2011, played his first 49 NHL games as a Duck. The goal marked his first NHL tally scored since Feb. 14, 2017, scored as a Duck against the Wild.

The Ducks continue their four-game homestand Saturday against Chicago.