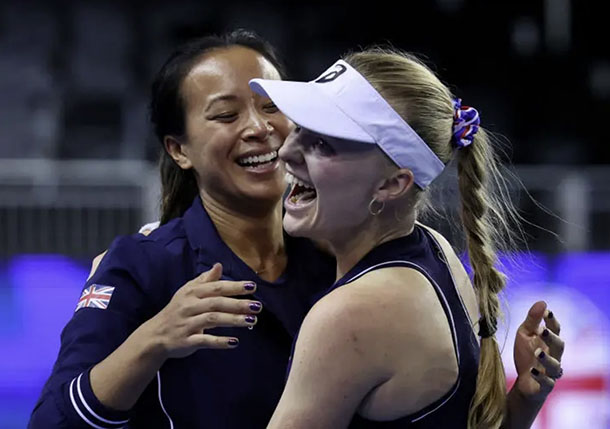 Harriet Dart and Heather Watson opened the door for a doubles triumph from Alica Barnett and Olivia Nicholls on Thursday in Glasgow.

For the first time in 41 years, Great Britain is heading to the Billie Jean King Cup semifinals.

The Brits swept past Spain on Thursday in Glasgow, engineering an improbable victory and setting a date with Australia in Saturday’s semifinals at the women’s team competition.

Great Britain got wins from Heather Watson (6-0, 6-2 over Nuria Parrizas Diaz) and Harriet Dart (6-3, 6-4 over Paula Badosa) before Alicia Barnett and Olivia Nicholls defeated Aliona Bolsova and Rebeka Masarova 7-6(5), 6-2 in doubles to send the British team and their fans into jubilation.

“It was just wonderful to see everything unfold today,” British Captain Anne Keothavong said. “I mean, I still can’t believe it. I mean, to beat Spain without dropping a set, I mean, I think in Fed Cup, Billie Jean King Cup, I think that’s got to be the biggest win certainly in my time as captain.

Dart’s win over former World No.2 Badosa in the day’s second rubber was the moment that Great Britain realized that they were in it to win it. The World No.98 was magnificent in racking up her third top-20 win of the season.

“On paper she’s, you know, a lot higher ranked than me,” she said. “She’s achieved so much. Such a great player. Always knew it was going to be an incredibly tough match.

“My goal was to make it as tough as possible out there for her, and I felt like I executed my game plan really well. I knew that all the pressure was on them, because like I said, on paper, she’s meant to beat me easily. But these events, you know, anything can happen.

Two winner take all ties on Friday in Glasgow

It’s all to play for for four nations on Friday in Glasgow, as Canada will face Switzerland for the Group A semifinal spot, while Team USA will face the Czechs for the last four spot in Group D. The winner of those ties will square off in the other semifinal on Saturday at BJK Cup.