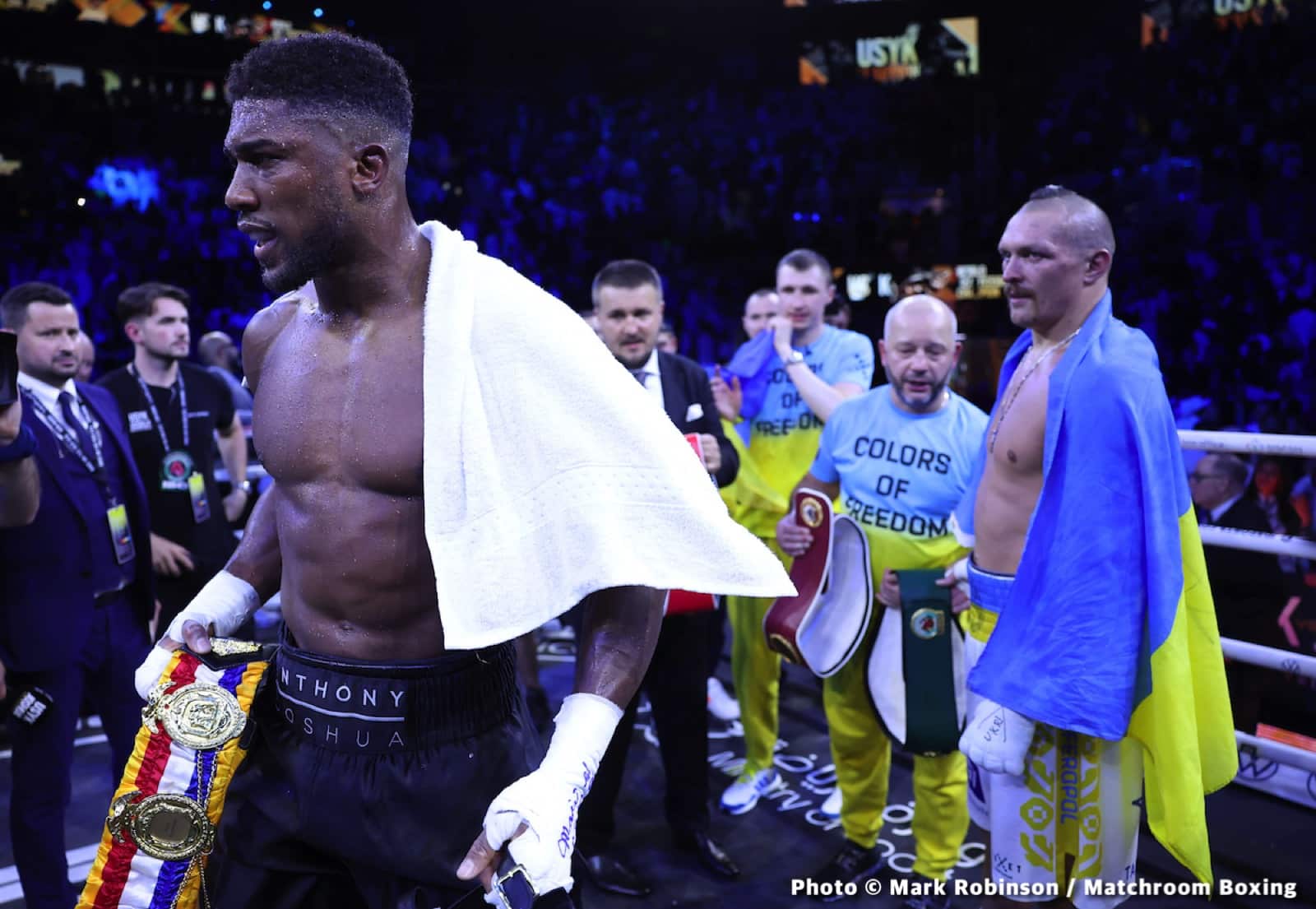 By Charles Brun: Dillian Whyte says he thinks Anthony Joshua is “spaced out” with “no consistency” to his personality. Whyte views the former two-division world champion Joshua as a strange guy who does weird things and is mentally “vacant.”

To be sure, Joshua’s recent behavior after his loss to IBF/WBA/WBO heavyweight champion Oleksandr Usyk last August could be seen as backing up what Whyte says is weird behavior from him.

Joshua went into a total meltdown mentally after it was announced that Usyk had won the fight. AJ grabbed two of Usyk’s belts and threw them out of the ring.

The next thing, Joshua took the mic and started babbling about a bunch of nonsense. At the end of it all, Joshua bowed on hands and knees at the foot of Usyk, honoring him. The way that Joshua appeared to shift between every emotion was disturbing to watch because it was all him. Usyk wasn’t saying anything. This was all Joshua.

Whyte (28-3, 19 KOs) is hoping to get a rematch with Joshua next year, as long as he beats fringe contender Jermaine Franklin on November 26th.

An easy mark has been picked out to ensure that the past his best 34-year-old Whyte doesn’t lose again, but as shot, as he’s looking now, you can’t even know for sure if he can get past Franklin. In some ways, Whyte’s game has deteriorated to below the level of Derek Chisora.

“He’s a weird guy, a strange guy. You can be speaking to him, and he just looks a bit spaced out and absent-minded, a little bit vacant. He’s done a few weird things as well, obviously,” said Dillian Whyte to Joe about Anthony Joshua.

“I hope he stays in boxing because I want to fight him. I want to get a chance to get my rematch. I hope he stays solid and of sound mind. I don’t want him to go crazy, retire and become a rapper or a priest.

“I’m not a comeback fight for nobody,” said Whyte when told that he’s Joshua’s comeback fight next year. “If he wants to come back and fight me, that’s great for me, but at the moment, I’m focusing on Jermaine Franklin,” said Whyte.

I hate to be the one to break this to Whyte, but he IS Joshua’s comeback opponent, and the only reason he’s getting the fight is that he’s over the hill, no threat, and recognizable to British boxing fans, who don’t care that he’s shot.

If this was about putting Joshua in with a heavyweight that would be competitive with him, Eddie Hearn would choose Joe Joyce, Deontay Wilder, or Daniel Dubois. Obviously, Hearn doesn’t want Joshua to lose, so he will put him in with Whyte, who will likely fall over from the first hard shot AJ hits him with.

“Joshua, I wanted him to fight me in December, but it didn’t happen,” said Whyte. “Eddie [Hearn] wants him to have another two or three fights and then fight me. I don’t know what’s going to change between now and next year. I don’t know,” said Whyte about Joshua.

It sounds like Whyte is in denial about how shot he is. Oh well, it doesn’t matter. He’ll find out the truth when he faces Joshua if he doesn’t get blasted to smithereens before that by the little-known Jermaine Franklin.