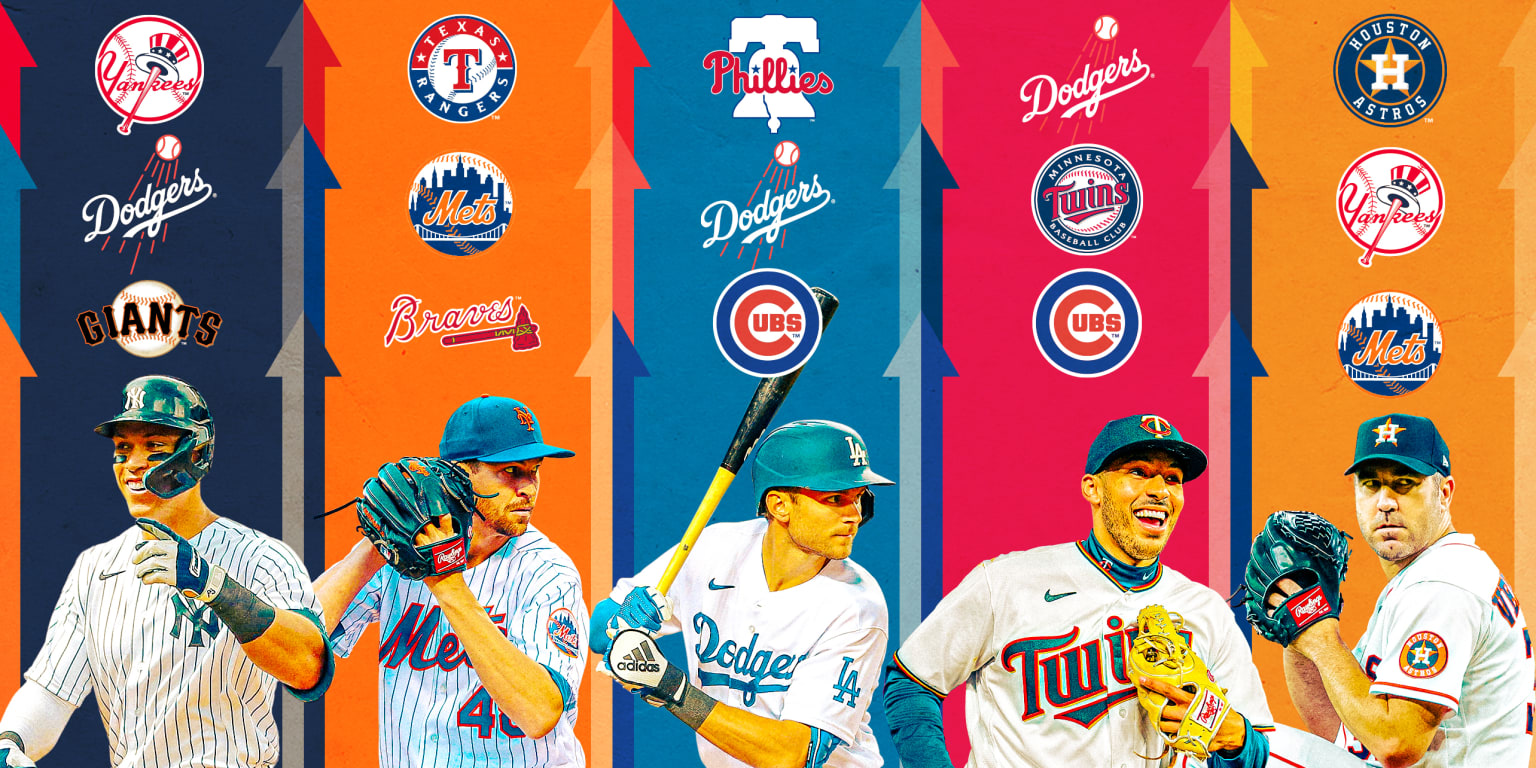 Where will the biggest free agents sign this offseason? Let’s see what the experts think.

MLB.com polled 50 of its reporters and analysts on where 11 free-agent stars will end up for the 2023 season. These are the consensus picks for each one — Aaron Judge, Jacob deGrom, Trea Turner, Carlos Correa and more.

Here are MLB.com’s predictions on where the top free agents will sign.

The face of the Yankees is going to stay that way, according to the voters. After Judge’s historic 62-home run season, how could New York let him go?

Judge is the biggest superstar in baseball in the biggest market in baseball, and that marriage could be too strong to break up. Judge turned down the Yankees’ seven-year, $213.5 million extension offer on Opening Day, but a reunion is still the most natural path forward for both the 30-year-old outfielder and the Yanks, especially after Judge’s MVP-caliber year.

Judge staying in pinstripes makes too much sense, and the Yankees continue to look like the favorites to sign Judge, according to the latest rumors — over other potential suitors from Judge’s home state of California, the Giants and Dodgers.

deGrom leaving the Mets? Yes, it really could happen. The MLB.com voters just barely picked the Rangers over the Mets as deGrom’s landing spot for 2023 in the closest vote of any free agent in the poll.

Early on in free agency, the Rangers look like deGrom’s top suitor from outside New York — their biggest priority this offseason is starting pitching, there’s no bigger ace available than deGrom, and they’ve already reached out to the two-time Cy Young Award winner.

It wouldn’t be a surprise if deGrom returns to the Mets, even though he opted out of the final year of his contract and $32.5 million in salary. The 34-year-old already is one of the great aces in Mets history, he’s spent his entire career in New York, and owner Steve Cohen has proven himself willing to do what it takes to bring top talent to New York — or keep it there. But Texas has started bringing in marquee free agents, too, like the club did with Corey Seager and Marcus Semien last winter.

Another year, another loaded free-agent shortstop class. This offseason, there’s Turner, Carlos Correa, Xander Bogaerts and Dansby Swanson. Turner might be the best of the bunch, with his elite combination of contact hitting, power and speed. So plenty of teams will be interested — but the Phillies already look like the favorite to get the 29-year-old star.

Trea would reportedly love to reunite with his former teammate Bryce Harper, and the Phillies are free to pounce on an elite shortstop without waiting for Judge’s market to develop, thanks to an outfield that’s already loaded up with sluggers. But the Dodgers would certainly like to bring back Turner after their hugely successful blockbuster trade for him in 2021, and there are other high-profile teams wading into the shortstop market, too, like the Cubs.

That shortstop market is so robust in part thanks to Correa — one of the big-name shortstops on last year’s market — opting out of the three-year, $105.3 million deal he signed with the Twins after the first season. So where will he go this time? Back to the Twins on a longer-term deal is one option — but not the likeliest one, according to our voters.

MLB.com predicts that Correa will be the shortstop to replace Turner in Los Angeles. The Dodgers reportedly “love everything” the 28-year-old Correa brings to the table. But there’s a question if they’ll make a serious run at him since he’s unpopular with Dodgers fans thanks to being on the 2017 Astros. That made the Twins, Cubs and Yankees popular choices for Correa in the poll.

Most of our voters think Bogaerts will stay with the Red Sox, where the 30-year-old has spent all 10 of his big league seasons, won two World Series and made four All-Star teams, including his latest in 2022. Bogaerts opted out of his deal with the Red Sox with three years and $60 million left on it, but both sides have expressed interest in a reunion, and for the Sox, keeping Bogaerts as their shortstop is priority No. 1.

Bogaerts re-signing with Boston would take one of the premier shortstops off the market, but if he does test that market, the other teams losing a shortstop of his caliber to free agency (Dodgers, Twins, Braves) could be options, as would the ones simply seeking a top-end shortstop (Phillies, Cubs). Those teams all received multiple votes as Bogaerts’ landing spot.

Verlander is entering his age-40 season, but the 17-year veteran just finished another Cy Young-caliber season in 2022. He’ll be a popular target for the “win-now” contenders looking for starting pitching to aid a 2023 World Series push.

Of course, the Astros are exactly such a team, and since Verlander just finished leading them to a second World Series championship, him staying in Houston is the likeliest outcome in the eyes of our voters. The two New York teams could also pursue Verlander, as the Yankees and Mets try to make deeper postseason runs in 2023 and unseat the Astros.

Swanson doesn’t have quite as much star power as Turner, Correa and Bogaerts, but his breakout over the last few seasons has been a huge part of the Braves’ success, and when he’s hot at the plate, the 28-year-old is as good as any shortstop, especially as he’s emerged as a top defender at the position. Atlanta knows that all too well, which is why the Braves are MLB.com’s pick to lock up Swanson, who has played for no other club since they traded for him when he was a prospect with the D-backs.

Atlanta was by far the most popular choice for Swanson in the poll. Otherwise, a chunk of voters think he’d be in play for the Cubs, who had a similarly electric but streaky shortstop in Javier Báez before they traded him to the Mets last July. Or the Dodgers, as Swanson profiles as a similar type of shortstop to Turner.

deGrom out, Rodón in? If the Mets lose one dominant ace, they could replace him with another. Rodón, who’s entering his age-30 season, is 27-13 with a 2.67 ERA and 422 strikeouts in 310 2/3 innings since the start of 2021, with an upper-90s power fastball and wipeout slider like deGrom but from the left side.

deGrom is the best pitcher in baseball when healthy, but Rodón is also good enough to be a co-ace to Max Scherzer if the Mets lose deGrom. The MLB.com experts have deGrom to the Rangers and Rodón to the Mets, but the opposite could also be true — deGrom could return to the Mets and the starting pitcher-needy Rangers could snap up Rodón. Texas was almost as popular a choice as the Mets — the MLB.com voters think both teams are getting a top free-agent starter, but which team will get which pitcher?

For the first time in over 15 years, the Cardinals need a new catcher. Yadier Molina is retiring, and while no one can really replace the franchise icon in St. Louis, Contreras is one of the few real stars at the position, and he just so happens to be a free agent.

The Cubs and Cardinals might be rivals, but jumping from Chicago to St. Louis would be a perfect fit for Contreras, so the Cardinals are the clear favorite to MLB.com’s voters. But the World Series champs are another strong option, as the Astros have been relying on the aging Martín Maldonado, who’s not the all-around threat Contreras is. Contreras, who can slug, run and throw, had a few teams get sizeable votes in the poll, with a return to the Cubs also in play, as is a deal with the Tigers as part of their rebuild.

Nimmo is the best outfielder on the free-agent market not named Aaron Judge. And like Judge, MLB.com’s experts think Nimmo is going to stay in New York.

Nimmo was a linchpin for the 101-win Mets as their everyday leadoff hitter and center fielder in 2022, so they should make every effort to re-sign the 29-year-old, who’s been a Met ever since he was their first-round Draft pick in 2011. But as with his fellow free agent deGrom, Nimmo is going to talk to other teams, and one of those teams just might get him. The Rockies, Giants and Mariners (who already have one former Met in their outfield in Jarred Kelenic) all generated significant votes for Nimmo, and even the crosstown rival Yankees could be in play if Judge leaves town.

The 2020 AL MVP has slugged like clockwork for the White Sox, year in and year out, ever since his big league debut in 2014. Why would he go somewhere else now, entering his age-36 season?

Most of the MLB.com voters think Abreu will remain in Chicago and continue to anchor the White Sox lineup. But a good chunk also think he’ll remain in Chicago … but jump to the Cubs. The Cubs were the next-most-popular pick for Abreu, as they don’t currently have an established big league first baseman, let alone one with Abreu’s track record.