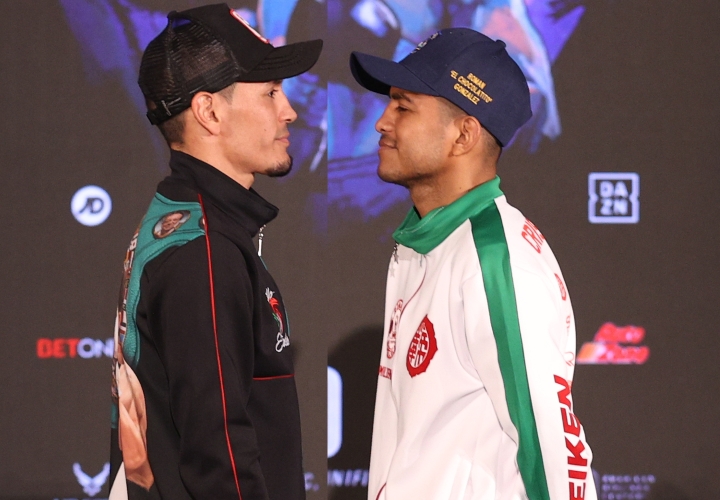 In two weeks and change, one of the great rivalries of the twenty-first century will get what is likely its final chapter.

It won’t be the final chapter of the generation around it.

Since Roman Gonzalez (51-3, 41 KO) rose to Jr. bantamweight in 2016, Jr. bantamweight has never been out of the conversation for best weight classes in boxing. His arrival was followed by other men who held titles below the 115 lb. class like Juan Francisco Estrada, Kazuto Ioka, and Donnie Nietes. They joined a cast that already had Carlos Cuadras and Srisaket Sor Rungvisai and the sport has had a lot of magic because of it.

That magic has come to the forefront again in 2022 as Jr. bantamweight has been one of the few weight classes to deliver wire to wire this year. Gonzalez dominated flyweight titlist Julio Cesar Martinez, upstart “Bam” Rodriguez blasted through Cuadras and Sor Rungvisai, Ioka avenged one of just two career losses to Nietes, and Fernando Martinez ended the IBF title reign of Jerwin Anacajas. Former flyweight titlist Junto Nakatani also arrived in the class ready to help with the long term reload.

The year will close with Jr. bantamweight delivering two of the best fights on the calendar in the final quarter of the year. On December 3 (DAZN), Gonzalez-Estrada III will end their personal story dating back to an epic Jr. flyweight clash in 2012. Estrada (43-3, 28 KO) is the lineal king of the class and the WBC belt will be on the line as well.

On December 31, Ioka (29-2, 15 KO) will attempt to unify his WBO strap with the WBA belt belonging to Joshua Franco (18-1-2, 8 KO). It will be the last of many unification bouts in a year loaded with them. The winner of Ioka-Franco has been ordered to face Nakatani as mandatory.

What we don’t know yet is whether we can get the sort of whittling down to climax this incredible era that Jr. bantamweight got in 2008. Let’s get back to that shortly.

It’s not hard to argue that this has been the greatest era yet for a weight class that has been around for approximately forty years. Whether it is the most talented might be debated by some. The late 80s saw a cast including Santos Laciar, Gilberto Roman, and Khaosai Galaxy. Galaxy was often regarded as the best of them but never engaged in a unification contest with any of the other prominent titlists of his time.

The era was excellent but incomplete.

Estrada-Gonzalez III will be the eleventh fight in what became a four-way rivalry between those two, Sor Rungvisai, and Cuadras with ten of the eleven fights having occurred at Jr. bantamweight. It had prominent side action like the two fights between Nietes and Ioka. What it hasn’t had is a final converging of lanes where one man was truly left standing.

Hardcore fans knew something fun as happening at Jr. bantamweight in the 2000s. A roster of battlers that included Masamori Tokuyama, Katsushige Kawashima, Martin Castillo, Fernando Montiel, and Nonito Donaire for a cup of coffee made for a number of memorable clashes. When Cristian Mijares defeated Kawashima in 2006 and 2007 to win the WBC title, the gelling of the era really started to come together.

Mijares went on to beat Jorge Arce, Jose Navarro, and then WBA titlist Alexander Munoz to enter some pound-for-pound conversations by the midway point of 2008. Late in 2007, former flyweight titlist Vic Darchinyan shook off a flyweight title loss to Nonito Donaire and made his way to Jr. bantamweight as well. In the summer of 2008, Darchinyan knocked out Dmitry Kirillov for the IBF crown. The stage was set for a showdown and we got it.

In a career best performance, Darchinyan upset Mijares in November 2008 to unify three titles and followed it with a defense against Arce. The only other titlist, Montiel with the WBO, exited the division the same month as Darchinyan-Mijares and stayed at bantamweight. The winner of Darchinyan-Mijares was left as the only world champion in class. The field whittled to one.

The era had a sense of completion.

If that never happens for this era at Jr. bantamweight, the volume of clashes between titlists and top contenders will still stand out historically. It’s been that good.

A clash between the winners in December sometime in 2023 would be even better. Ioka, Gonzalez, and Estrada have all competed in the same weight divisions for a long time without Ioka, a titlist in four divisions, facing either. Joshua, the brother of “Bam” Rodriguez, would be a fresh face in the mix if he wins. Newly minted Fernando Martinez factoring in before the end of 2023 would be welcome as well.

Unification isn’t the end-all be-all. Sometimes the talent gap between titlists makes it a statistical accomplishment more than a competitive one (see: Inoue-Butler, arguably the biggest foregone conclusion on paper ever in a unification clash). But in an era this good, it would be a shame if we don’t get that sort of symbolic finish line to round out one of the best fistic storylines of its time.