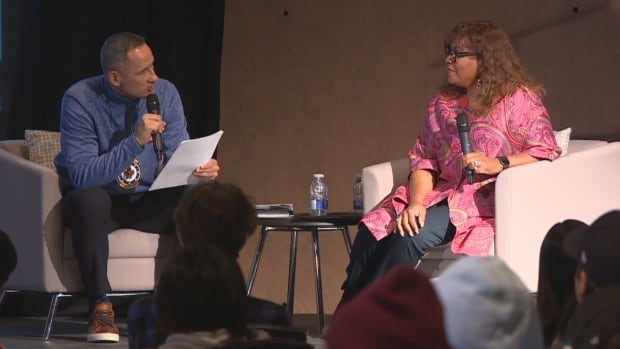 A prominent figure within the National Hockey League is hoping to inspire young people to learn how their voices can make a difference in sports and beyond.

Kim Davis, the NHL’s executive vice-president of social impact, growth initiatives and legislative affairs, spoke to a crowd of more than 100 youth at the Canadian Museum for Human Rights on Wednesday in Winnipeg.

The theme of the conference was “Raising our Voice,” and that’s exactly what Davis encouraged all of the youth in attendance to do, even when it might be scary to do so.

“The concept of being fearless is not that you aren’t scared, but … in spite of you being scared, you still persevere,” Davis said.

With scandals in football and hockey, it’s been a tough year for youth sports.

Davis says young people speaking out on previously untouchable topics such as race and gender inequality, as well as sexual assault, is courageous and will only help with shaping the future.

That comes with more diversity and inclusion, which she says form a symbiotic relationship that produces dignity, something everybody wants.

“I think we are always better when we have more diverse voices in any room,” Davis said. “We often hear people talk about the importance of representation and that’s not just because we want to have diversity because inclusion means different points of view from people’s lived experiences.”

Youth are the future leaders of Canada and across the world. The need to shape their views and expectations, while minimizing cynicism around what’s possible, will only prepare organizations, institutions and society more broadly for the future, Davis says.

“If you create representation without attention to inclusion, then basically you set people up for failure,” she said.

Many of the young people present were from diverse backgrounds and play sports.

Sanveer Singh came to Winnipeg two years ago from the United Arab Emirates.

The 16-year-old plays a bevy of sports, including hockey and soccer, and he thought the event provided him a good opportunity to learn more about hockey and its background.

“I got to know that the leadership is not only about playing in a sport and leading a team,” Singh said. “It’s about respecting everyone’s opinion and the decision they take for the team and how they play for the team.”

Bennink understands how important it is for sports to be safe.

“I know for myself that if I’m not comfortable I can’t play to the best of my ability and things, so if I’m comfortable I’ll play better,” she said. “It’s good for you to have a team that you can rely on for things.”

Although Davis said the NHL is a work in progress, she applauded the work True North Sports and Entertainment — which owns the Winnipeg Jets — has done to promote diversity and inclusivity.

“I think they have learned a lot about the ways in which they need to make sure that they are culturally available in different communities, and I see them leaning into that in a much more intentional way,” Davis said.

Kevin Chief, co-founder of the Winnipeg Aboriginal Sport Achievement Centre, who helped organize Wednesday’s event along with the True North Youth Foundation, says True North has sought guidance from the Indigenous community and other cultural groups in Winnipeg.

Celebrating the importance of diversity is also key.

“We are at our best when we do that through the voices and talents of children, youth and our elders. And I think that’s the approach True North has taken,” Chief said.

He believes you can’t simply tell young people something is possible. You have to show them that it is.

And Chief said Davis did that for the youth at the Human Rights Museum.

“It doesn’t even really matter what her answers are because her sitting here and speaking to them … she really has become the face of the National Hockey League, is really impressive.”

“We’ve got to make sure that we put these things on the agenda, that we showcase people like Kim Davis,” Chief said.

“We have the opportunity to bring out people like [Winnipeg Jets co-owner] Mark Chipman in the business community to be able to highlight that so that young people know that their lived experiences, the struggles that they are going through, whether that’s racism or the struggles around poverty, that they know that they can overcome those things, and that there’s people that have their back.”

WATCH | Young people learn how they can make a difference in sports:

With scandals in football and hockey, it’s been a tough year for youth sport. Still, some hope to inspire young people to make a difference in the future.