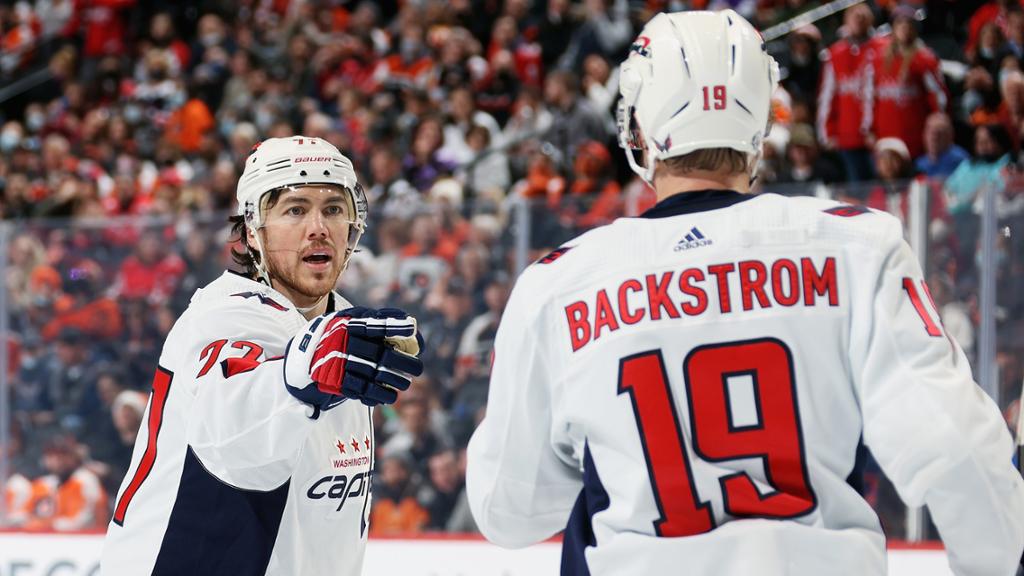 Forward Nicklas Backstrom joined the Capitals for their morning skate Saturday for the first time since having resurfacing surgery on his left hip June 15. Backstrom, who wore a no-contact jersey, has been skating on his own with forward Tom Wilson (torn anterior cruciate ligament in left knee) for more than three weeks.

“It was good,” coach Peter Laviolette said. “It’s part of the process where they do a lot of stuff behind this wall and then they do stuff that we don’t necessarily see on the ice and they progress and progress and that’s the next progression is to get out with our guys and start to move a little bit. Real positive to see that.”

It is unknown when Backstrom will be ready to practice with Washington. Wilson has yet to skate with the Capitals.

Forward T.J. Oshie, who will miss his 11th straight game with a lower-body injury when the Capitals host the Colorado Avalanche on Saturday (7 p.m. ET; NBCSWA, ALT, ESPN+, SN NOW), also participated in the morning skate in a no-contact jersey and could practice with the team Sunday.

Defenseman Dmitry Orlov was a full participant in the morning skate but will miss his seventh straight game with lower-body injury.

“Still no timetables, but it’s nice to see them out there competing and battling a little bit,” Laviolette said of Oshie and Orlov. —Tom Gulitti

Travis Konecny won’t play against the Montreal Canadiens (7 p.m. ET; CITY, SNE, TVAS, NBSCP, ESPN+, SN NOW) because of an upper-body injury, and the forward has been sent back to Philadelphia for further evaluation.

Konecny left the Flyers’ 4-1 loss to the Boston Bruins on Thursday with 4:13 remaining in the second period after a collision with Bruins forward David Pastrnak.

Konecny had his seven-game point streak end in the game, but leads Philadelphia with 19 points (seven goals, 12 assists) in 17 games.

The defenseman has missed the Lightning’s first 17 games while recovering from offseason shoulder surgery.

Bogosian hasn’t played since June 26, when the Lightning lost in six games to the Colorado Avalanche in the Stanley Cup Final.

“I think it will just be a work in progress, trying to get your timing down, speed,” Bogosian said. “Practice is one thing, but game speed and game shape and all that type stuff is completely different. So [I’m] looking to integrate myself back in the lineup and [I’m] usually not a guy that tiptoes into things, so I’ll try to go headfirst into it. I’m looking forward to getting back out there whenever that is.”

Bogosian said he will talk to Tampa Bay coach Jon Cooper before a final decision is made on his availability against Nashville.

“He’s a veteran presence,” Cooper said. “He’s been with us, he’s won with us. He knows his way around this league. He’s big, [has] size, can skate. It’s always those first games, you’ve got to get those out of the way. But I know he’s excited and we are, too, to have him back.” — John Glennon

The 28-year-old defenseman missed the first 17 games this season with a strained abdominal muscle.

“I think I worked really hard with the trainers to get to this point,” Matheson said. “I feel 100 percent and I’m confident in my preparation to be ready for tonight.”

The native of Pointe-Claire, Que., was acquired from the Pittsburgh Penguins in a trade for defenseman Jeff Petry and forward Ryan Poehling on July 16.

“It’s going to be special, even a little strange,” Matheson said. “I’m excited to play for the team I watched growing up.”

Defenseman Jordan Harris will be a healthy scratch and miss his first game of the season. Canadiens coach Martin St. Louis expects Harris and fellow rookie defensemen Arber Xhekaj and Johnathan Kovacevic to have a rotation for the final pair.

“They won’t be coming out of the lineup sometimes because they’re playing poorly, it’s just the situation we’re in right now,” St. Louis said. — Sean Farrell

Jeremy Swayman will make his first start since Nov. 1 when the Bruins host the Chicago Blackhawks (7 p.m. ET; NHLN, NESN, NBCSCH, SN NOW). The 23-year-old goalie was activated off injured reserve Wednesday after recovering from a lower-body injury.

Swayman stopped all four shots he faced in 14:06 before exiting early in Boston’s 6-5 win against the Pittsburgh Penguins on Nov. 1. He backed up Linus Ullmark in a 4-1 win against the Philadelphia Flyers on Thursday after returning to the active roster.

“We consult the training staff all the time,” coach Jim Montgomery said about splitting time between the two goalies. “One thing I gotta say is the communication here … the communication at every level is incredible, top-down. It’s a well-oiled machine.”

Swayman is 2-1-0 with a 3.45 goals-against average and .878 save percentage in four games (three starts) this season. — Joseph Pohoryles

The forward sustained a lower-body injury in the third period of Vegas’ 4-1 win against the Arizona Coyotes on Thursday. He had one assist in 15:14 of ice time but did not play after the 8:58 mark of the third period.

After they play Saturday, the Golden Knights will visit the Vancouver Canucks on Monday.

Cassidy said he hadn’t decided if center Jake Leschyshyn or forward Michael Amadio would replace Roy in the lineup.

Eric Comrie is expected to be out for multiple weeks with a lower-body injury.

The Sabres goalie was injured Wednesday against the Ottawa Senators when Buffalo defenseman Rasmus Dahlin knocked Ottawa forward Mathieu Joseph into Comrie at 9:43 of the second period. Comrie stayed in the game and allowed a goal 14 seconds later before leaving at 13:08.

An MRI revealed an issue that will keep Comrie out for an extended stretch.

The Sabres recalled Ukko-Pekka Luukkonen from Rochester of the American Hockey League on Thursday. He was 6-3-0 with a 3.07 goals-against average and .898 save percentage in nine AHL games.

“I talk a lot about confidence, and that, for sure, helps,” Luukkonen said. “I kind of get that feeling from those games that I’ve been able to do it before, play well at this level. It’s time to show it again. But in the end, last year doesn’t matter if you don’t play well this year. So, I think it’s important to show up well again.”

Zemgus Girgensons did not practice and will be reevaluated Monday. The forward left the game against Ottawa late in the second period with an unspecified injury.

Mattias Samuelsson is closer to returning after participating in a full practice Friday. The defenseman, who has missed 12 games with a lower-body injury, skated on a pair with Henri Jokiharju, but coach Don Granato said Friday they won’t rush him back.

“I think he’s got to get his reps and feel good about and confident where he’s at,” Granato said. — Heather Engel