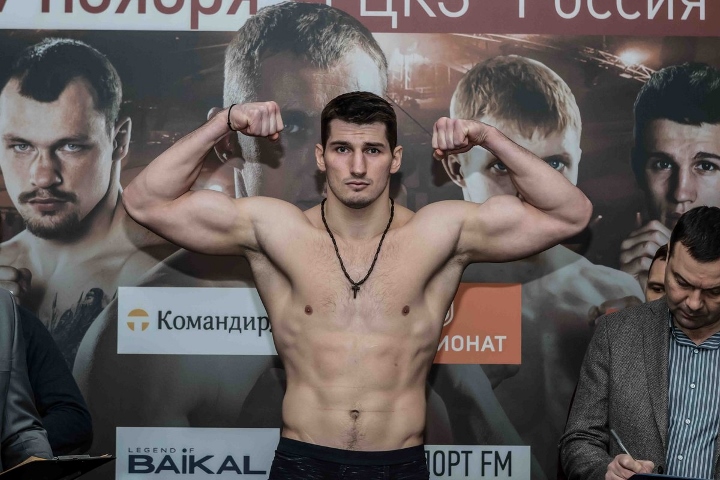 Despite an ongoing confrontation between Russia and a number of Western nations and a major-scale military conflict between Russia and Ukraine, the state’s fight scene was relatively active in October and November with several events, which featured Russia’s top domestic talent in both local and international encounters.

The actual status of those fights remains to be seen as major sanctioning bodies imposed various sanctions and restrictions on Russia’s domestic fighters. Nevertheless, fighters continued to do their work even under this grim reality.

Beljo hadn’t fought for three years before this fight and hadn’t beaten an opponent with a pulse for eight years (when he scored stoppage wins over Colombian veterans Alejandro Berrio and Epifanio Mendoza). He was continuously stalked, rocked in the fight, and put down early into the second with a major left hook. The Bosnian got up but the referee stopped it almost immediately after that when Papin continued his onslaught. Beljo protested mightily and was granted a rematch if he ever wants to execute this option.

With the result being prescripted, its outcome hardly matters. What matters more is the time ticking for Papin, who is 35, and has a relatively narrow window for his title opportunity, which is closing rapidly due to political and military situations.

In a co-feature, super featherweight Murad Aliev (5-0-1, 4 KOs) knocked out Namibian fighter Nathaniel Kakololo (14-5-1, 6 KOs) at 0:47 of the sixth round. In his previous fight, Aliev decisioned 12-0-1 WBO-ranked compatriot Ruslan Kamilov.

On November 11, Russia’s 2020 Olympic gold medalist Albert Batyrgaziev continued his road to a possible shot at one of the major belts with a confident performance against Panamanian import Ricardo “El Cientifico” Nunez (23-4, 21 KOs), which resulted in a wide unanimous decision: 100-90, 99-91, and 99-91. One can argue that the margin was slightly exaggerated by the officials.

After fighting as a featherweight in 2021 (and scoring an impressive streak of stoppages), Batyrgaziev jumped two divisions up in weight, resulting in a partial loss of his punching power. It can be a slight problem for the fighter, who relies mostly on offensive, combination boxing as does Batyrgaziev.

Against Nunez, who challenged Gervonta Davis for the Super WBA super featherweight belt and was stopped in two in 2019, this blemish was evident during the first half of the fight. The Panamanian used his timing and slight reach advantage to neglect Batyrgaziev’s activity.

Albert increased tempo during the second half of the bout and used his other advantages – a southpaw stance and impressive cardio – to overcome the Panamanian’s resistance, although some eaten shots were unnecessary.

BoxingScene had it 98-93 – for Batyrgaziev, who promised homework to eliminate mistakes would be done in preparation for his next fights. All in all, it was a solid learning experience for the 24-year-old talent. The bout and the supportive undercard were promoted by Dynamo Boxing.

Former European and IBO light heavyweight champion Igor Michalkin came back to the ring fourteen months after his TKO loss to Matthieu Bauderlique in France to convincingly outpoint Russia-based Kyrgyz native Dilmurod Satybaldiev over ten rounds, albeit the official status of the fight is yet to be confirmed.

Satybaldiev (now 13-3, 4 KOs) was coming off his sensational stoppage victory over a multi-division, multi-title contender/challenger Maxim Vlasov this past May. Against Michalkin, 37, he was less consistent. The Russian veteran relied effectively on his jab during the first half of the fight, clinching Satybaldiev whenever he was able to get close.

Michalkin slowed down after the mid-point to save some energy for the final surge, which was successful and earned him a victory and a local “Champion of the Commonwealth” title.

What is next for Michalkin (25-3, 11 KOs)? His promoter Vladimir Hryunov voiced that a quick rematch with Satybaldiev is in play for the 29th of December. Another possible option is the recently retired Vlasov (46-5, 26 KOs), who can kick off another run at (who knows) another title opportunity.

On the same card, Russian middleweight champion Rokhman Akhmetkhanov (5-0, 5 KOs) defended his regalia in style by stopping usually durable Sergey Gorokhov (11-6-2, 7 KOs) in four rounds. Akhmetkhanov wobbled Gorokhov in the third and continued his onslaught in the fourth until the referee has seen enough and waved it off.