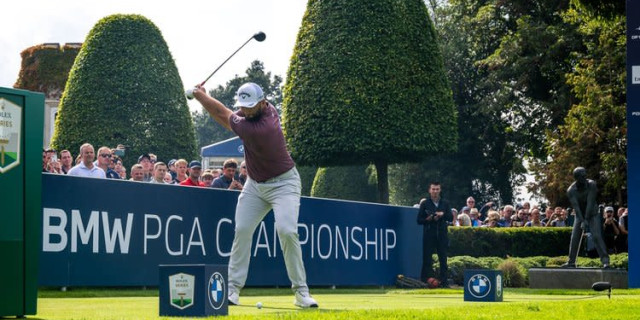 WILL somebody please explain to me how it is possible that half as many ranking points were on offer at the season-ending DP World Tour Championship compared with the RSM Classic?

It is a farce. The field in Dubai included Rory McIlroy, Matthew Fitzpatrick, Tyrrell Hatton, Jon Rahm, Tommy Fleetwood, Viktor Hovland, Alex Noren and Shane Lowry. In total, eight of the world’s top 30 golfers were playing in what was one of the strongest fields of the entire year. The total prize fund was $10m and the 50-man field were playing for bragging rights on the DP World Tour.

I have to say that it makes a complete mockery of the world rankings and it comes as no surprise to hear Rahm brand the whole system as “laughable”. He is absolutely correct.

“I’m going to be as blunt as I can, I think the OWGR right now is laughable,” Rahm said. “I understand what they are trying to do with the depth of field but having the best players in the world automatically makes the tournament better.

“I don’t care what their system says. They have made a mistake. I think some aspects of it might be beneficial but I think they have devalued the value of the better players.

“The 30 best players of the year should not be punished because it’s a smaller field. Depth of field doesn’t mean a better tournament.

“I could go on and on. I think they have missed the mark on that stance quite a bit.”

And DP World Tour chief executive Keith Pelley is in a position to do something about it as he is a board member of the Official World Golf Rankings. Pelley has promised to take Rahm’s view on board but the Spaniard’s point is that we should not have come to this in the first place. Even Pelley admits that the rankings do not accurately reflect players’ performances.

Ranking points are determined on a tournament’s total strength of field rating. With only 50 players competing on the Earth Course at Jumeirah Golf Estates, the tournament had a field rating of 121 points with around 22 points going to the winner, Jon Rahm.

These feed into a ranking calculation which is weighted on recency of results and an average determined by the number of counting events each player has played over the past two years.

It is abundantly clear that the world rankings do not accurately reflect the game of golf. Remember that LIV Golf tournaments are not yet eligible for ranking points because they are played over 54 holes, with a limited field and no cut.

But do you believe that Dustin Johnson is only the 38th-best player in the world? Or that Patrick Reed should be ranked 62nd?

Rahm said: “Would you rather win a tournament when you have the number one player in the world or the 30th there? I think it’s more valuable if you’re beating best players in the world. I think a lot of people would agree and I think it should reflect that.”

It is safe to say that most professionals would far rather win the DP World Tour Championship than the RSM Classic and would expect to pick up more ranking points for doing so.

Be part of the action with a selection of unique golf tournament experiences, from playing in a pro-am with the stars to watching the action at golf’s most illustrious events. Whether it’s the Masters or The Open, The Ryder Cup or WM Phoenix Open, build your own bespoke package with the experts at Golfbreaks.com.