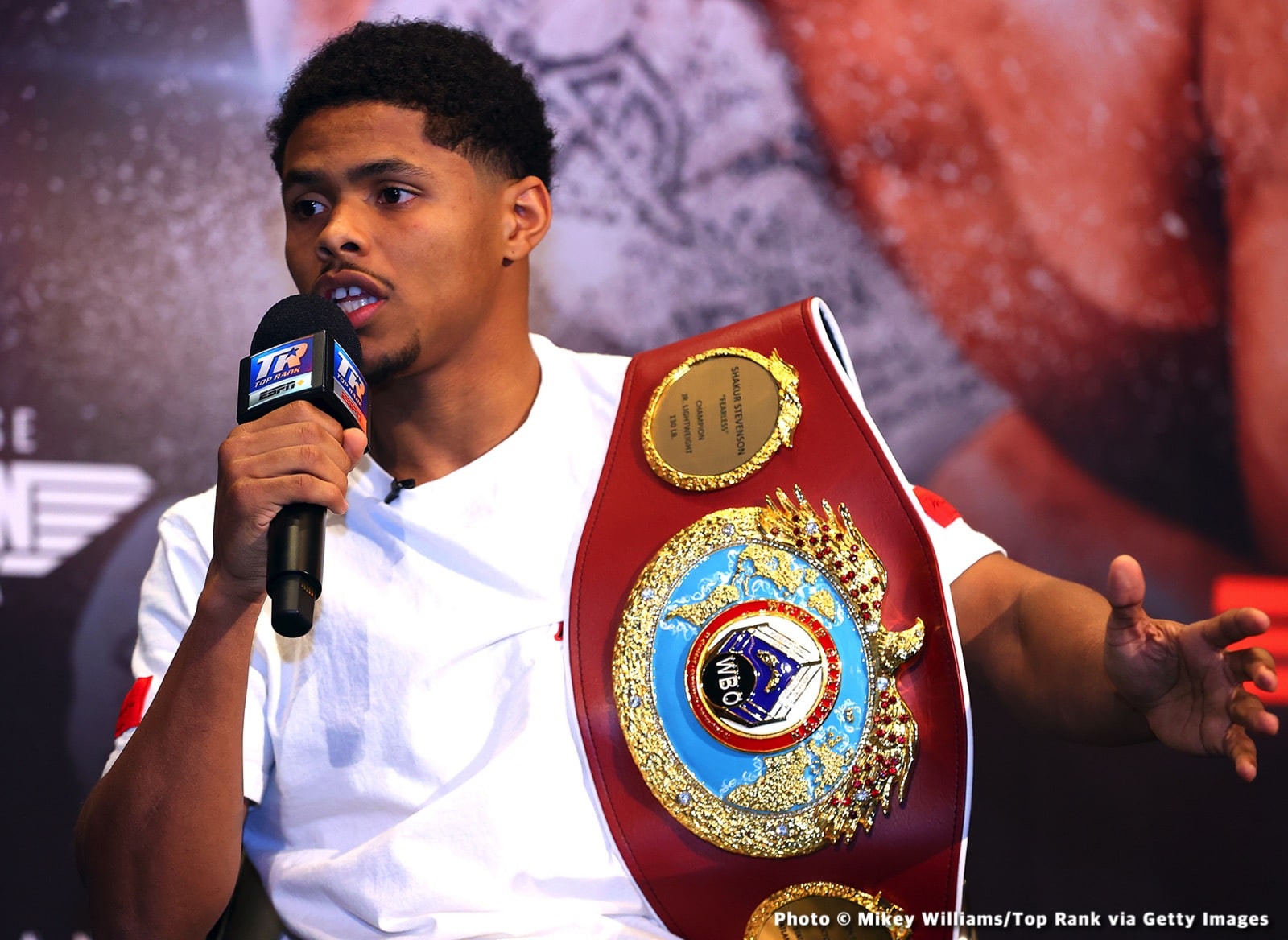 By Sam Volz: Shakur Stevenson is beginning to sound almost obsessed with getting fights against the popular William Zepeda and Isaac ‘Pitbull’ Cruz for his next contest.

Neither of those top contenders is looking to fight the newcomer Stevenson (19-0, 9 KOs) to the 135-lb division, but that’s not stopping him from continuing to name-drop both.

Pitbull Cruz wants a rematch with WBA ‘regular’ lightweight champion, but he’s got to wait for him to fight Hector Luis Garcia and Ryan Garcia to fight next year.

Zepeda’s promoters at Golden Boy Promotions will match him against the last man standing in the undisputed clash between Devin Haney and Vasyl Lomachenko. Shakur has nothing to over Zepeda and Pitbull.

“The contract is on the way, mother f***er,” said Shakur Stevenson on social media, saying he supposedly is sending a contract to William Zepeda. “Let’s see what you do.

“Your team is already saying, you know. New era. Our generation is taking over. We’re taking over everything. Y’all got to move out of the way.

“‘Zepeda might beat you.’ Okay, tell him to fight me so I can show you. How is he going to beat me if he knows what I know? I’m sharpening my skills every day. I’m watching boxing and learning from the greats, from the people before me.

“What is he doing? I don’t know what he doing,” said Stevenson about Zepeda. “But it ain’t looking like he’s sharpening s**t up. He’s just throwing a bunch of punches for no reason. He is slow as hell. How are you going to be that slow and beat me?” said Stevenson.

Shakur, 25, isn’t a world champion, he’s not hugely popular, and his defensive-oriented style of fighting is not appealing. Popular Mexican fighters like Zepeda and Pitbull don’t want to chase their opponents around the ring for 12 rounds. It would be worth it for them to fight Shakur if he massive star, but he’s not reached that point.

Stevenson doesn’t need to lift a finger to get a title shot in 2023. His promoters at Top Rank plan on matching him against the winner of the fight between undisputed lightweight champion Devin Haney and Vasyl  Lomachenko next year.

All Stevenson needs to do is wait, and he’ll have a title shot dropped into his lap by his promoters.

“His team is already putting it out there that this fight is too soon,” said Stevenson about Zepeda. “I’m 25, and he should be 26 or 27. What the f**k is he waiting on?

“I’m betting on myself every time. Y’all never seen me have any trouble in my fights. In my last fight, I dominated from start to finish [against Robson Conceicao]. All  they could talk about is, ‘He got hit a little bit more.’ Man, I dominated that dude. I beat him up.

“Two killers, supposedly. Pitbull and William Zepeda. Two killers. One is undefeated, and one got one loss, and it’s to Tank. Come on. If they killers, come on, let’s do it.

“Line them up. Put them in front of me, and I’m smoking them. Bet your bag on me, I’m telling you. You going to come up,” said Stevenson.