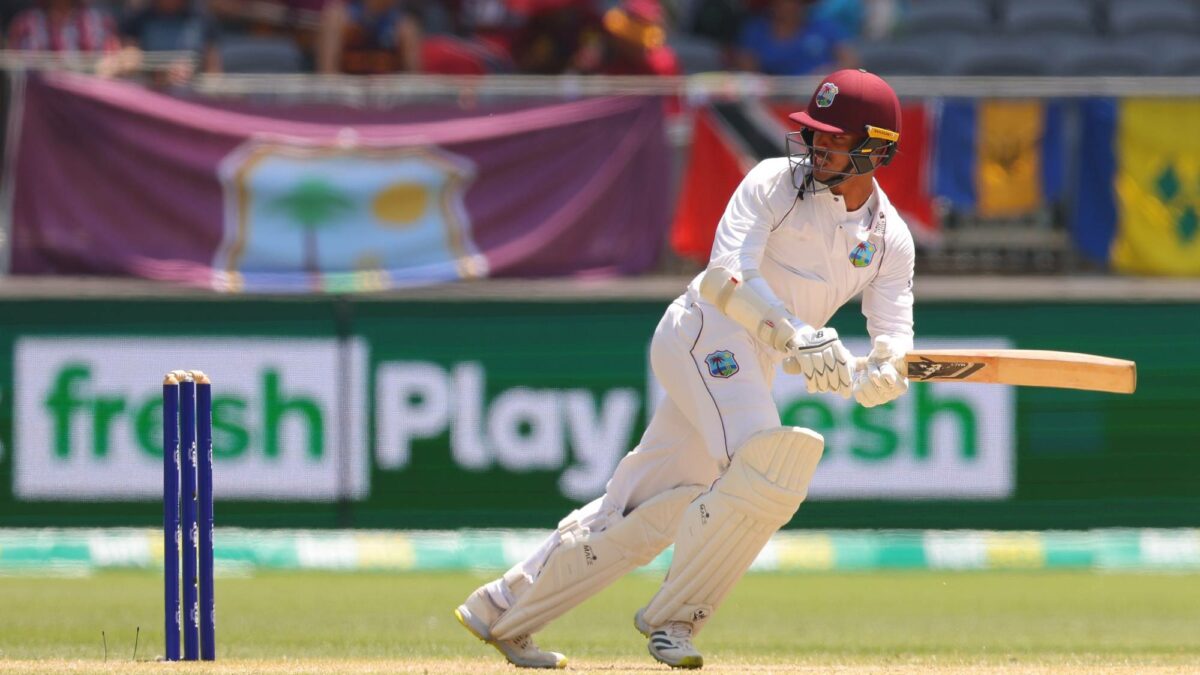 Tagenarine Chanderpaul has earned high praise for his fighting spirit after making an eye-catching Test debut against Australia in Perth.

Chanderpaul posted scores of 51 and 45 in his side’s 164-run loss in the first Test at Optus Stadium.

The son of West Indies legend Shivnarine Chanderpaul showed plenty of guts, recovering from a painful hit to the testicles early in the first innings to post his maiden Test half-century.

His 116-run opening stand with captain Kraigg Brathwaite in the second innings gave the West Indies a slither of hope of salvaging a draw, before Australia’s attack took hold.

Chanderpaul looms as a key player in the day-night Test in Adelaide, starting Thursday.

“Obviously Australia is a tough place to play cricket, so to start the way he did shows a lot of character,” Chase said.

“His dad had that same kind of characteristics about sticking in and fighting. That’s where he got it from.

“If he can emulate what his dad did, he will be a legend in the game as well. I hope he continues in this vein and takes confidence from this first game.”

Paceman Alzarri Joseph is tipped to bring more heat in Adelaide after struggling early in Perth.

Joseph failed to hit top speed in Australia’s first innings, but he reached 148km/h during a devastating spell in the second dig in which he struck Marnus Labuschagne on the helmet.

“I spoke to Alzarri on the first morning, he wasn’t feeling well,” Chase said.

“I said he looked a bit down on pace, so I spoke to him. He said he was having a bit of a headache but was still trying to push through,

“I admire that about him. Then in the second innings he really got it through and it was exciting to see.”

England are “not scared of losing” the first Test, with Pakistan requiring 263 more runs to win on what looks like being a thrilling final day’s action in Rawalpindi.

The tourists’ daring declaration set Pakistan just 343 runs to win on a very flat surface, after Ben Stokes’s team scored 264 runs in just 35.5 overs in their own second innings on Sunday at a run rate of more than 7.5 an over.

At the close, the hosts were 2-80, with Imam-ul-Haq – who will be looking to add to his first-innings century – unbeaten on 43.

Under Stokes and coach Brendon McCullum, England have repeatedly stressed their desire to become entertainers and get results rather than draws, an approach epitomised by their efforts to score as quickly as possible in their second innings on the afternoon of day four.

The declaration has significantly reduced the likelihood of the match finishing in a draw, with assistant coach Paul Collingwood believing Stokes’ bold approach in Rawalpindi is part of the bigger picture.

“It’s exciting, isn’t it? On a pitch that’s been pretty docile and slow, and to be in a position now to watch a game that’s exciting tomorrow, it’s going to be great for everyone,” said Collingwood.

“The bigger picture of what they (McCullum and Stokes) want is Test cricket to be entertaining and the way we have forced the game has got us a Test match tomorrow that everyone wants to watch.

“I’m looking forward to our guys going out there and eking out another seven wickets to go on and win the Test match. We are confident we can do it.”

He added: “The boys have shown they are willing to come up with different plans to take wickets out there and it is going to be an exciting day.

“It has been pretty clear right from the start we are willing to lose games for the sake of putting ourselves in the position to win them.

“Some might say it is an early declaration. We will see tomorrow if it is or if it is a really good declaration.

“We are not scared of losing, which is a good position to be in. Tomorrow, hopefully, we can get on the right side and get a win.”

Pakistan were two wickets down after England’s tactics with the short-ball appeared to pay off, with key man Babar Azam making just four before edging behind, and Abdullah Shafique hitting Ollie Robinson to deep square leg.

Azhar Ali was then forced to return to the dressing room after retiring hurt following a blow to the top of his right index finger. It remains to be seen whether the batter will recover in time to feature on the final day.

England’s unconventional batting approach was epitomised by Joe Root, who briefly switched to batting left-handed for two balls during his innings in an attempt to disrupt the bowler but was almost caught at conventional point-turned-square-leg before reverting to his usual stance.

However, Collingwood said Root’s decision to switch was not entirely random.

“He does (bat left-handed) sometimes. He looks better batting left-handed than I do right!” he joked.

Lower-order batsman Mehidy Hasan Miraz has conjured up an unbeaten 38 in a low-scoring thriller as Bangladesh stunned India by one wicket in the opening one-day international in Mirpur.

Chasing 187 for victory on Sunday, the home side slumped to 9-136 in the 40th over with India looking in command at the Shere Bangla National Stadium.

But Mehidy refused to throw in the towel, and combined with last man Mustafizur Rahman in a 51-run partnership, Bangladesh’s highest for the 10th wicket, to secure a memorable victory with four overs to spare.

It was Bangladesh’s second partnership of 50-plus runs for the 10th wicket but the first that’s resulted in a victory.

“I am really excited that my innings helped the side achieve a victory from a position when few hoped for a victory,” Mehidy said.

“I told Mustafizur that we should not give up hope. The strategy was to take it over by over and punish the bad balls. Happy to execute the plan perfectly. I’ll keep this performance close to my heart always.”

An upset looked on the cards after Bangladesh, having elected to field, bundled out India for 186 in 41.2 overs, with Shakib Al Hasan (5-36) the destroyer.

He wrecked India’s top order, taking the wickets of Rohit Sharma (26) and Virat Kohli (nine) in the same over.

KL Rahul saved India’s blushes with 73 off 70 balls before falling to Ebadot Hossain (4-47), who also claimed the important wicket of Shreyas Iyer (24).

Deepak Chahar gave India the perfect start by dismissing Najmul Hossain with the first delivery of the Bangladesh innings but skipper Litton Das (41) and Shakib (29) kept the hosts on course.

They suffered a mid-innings collapse but Mehidy, dropped by Rahul on 15, punished India for their sloppy fielding and general indiscipline in bowling which resulted in 17 extras.

In the final few overs, Mehidy showed grit and determination as India closed in on victory.

After surviving his scare, he launched a spectacular attack against Kuldeep, hitting him for two sixes in the space of three balls to transform the course of the match and put the pressure back on India.

India lost their momentum and Mehidy confirmed his side’s victory, driving Chahar through cover for a single.

“They held their nerve in the end. If you look back how we bowled right from ball one — of course we would have loved to bowl better at the end — but we bowled pretty well for 40 overs and took wickets,” said Sharma.

“We just didn’t have enough runs. Another 25-30 runs would have helped. We were looking at 240-250 after the 25-over mark. When you keep losing wickets it is difficult. We need to learn and understand how to play on such wickets.”

Mirpur will also host the second ODI of the three-match series on Wednesday.