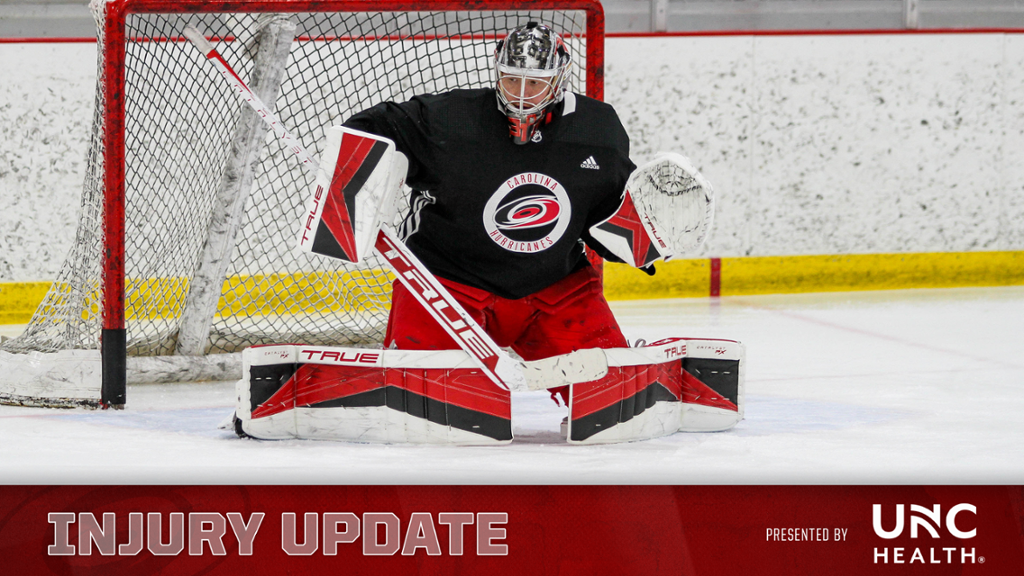 RALEIGH, NC. – The Carolina Hurricanes skated for the first time since returning from their 10-day road trip Thursday, working at Invisalign Arena on the campus of Wake Competition Center.

The morning session was highlighted by two bits of positive news, beginning with forward Ondrej Kase being back on the ice.

For approximately 30 minutes leading up to the team taking the ice, the 27-year-old winger went through drills with Max Pacioretty under the guidance of Justin Williams. Kase has been in concussion protocol since October 13, just one day after playing in the team’s season opener against Columbus.

Ondrej Kase, for at least the first time to the public eye, is on the ice and working alongside Max Pacioretty with Justin Williams ahead of today’s #Canes practice.

Kase has been in concussion protocol since October 13. pic.twitter.com/5ani3o9uXN

While Kase and Pacioretty shot on Equipment Manager & Emergency Backup Legend Jorge Alves in net, the team’s creases were fully staffed when the entire unit took to the ice.

Netminder Frederik Andersen rotated in between the pipes with Pyotr Kochetkov and Antti Raanta, skating with the full team for the first time since suffering a lower-body injury in early November.

One half of the 2021-22 Jennings Trophy-winning duo, Andersen had worked with Goaltending Coach Paul Schoenfelder just before the team departed on their trip to Pittsburgh, St. Louis, Los Angeles, and Anaheim, and made further strides while the team was away.

“It was just kind of to a point where it wasn’t getting any better. It was something I dealt with for a while but I’d been through it before and I knew if I kept working and kept putting stress on it, it wouldn’t have been good,” the netminder said of the injury. “It was a good time to get it figured out because we still have quite a bit of the season left. Had it been the very end of the season, this would have been a very different injury.  Maybe it would have been one that I would have been able to play through, but at this point, it would not have been wise.”

Andersen confirmed that the injury was not to the same knee that caused him to miss the final six games of the 2021-22 regular season and entire 2022 Stanley Cup Playoffs.

When asked when he felt he might be available to play again, the netminder said, “We’re trying to see how the injury responds to a little bit more load. We’re not quite out of the woods yet. I want to be able to come back and not have to deal with re-aggrevating it right away, but all positives, so far.”

“It’s a good sign. I was happy to see him out there today,” Rod Brind’Amour offered when asked about the situation. “It’s still a ‘sharing the net’ type of thing and it’s his first practice with us after being out for a long time. He’s not close to playing, but at least we’re taking the right steps.”

While the news regarding Andersen and Kase was positive on both fronts, there was one update on the unfortunate side of things.

Forward Sebastian Aho did not participate in today’s skate due to what Brind’Amour described as a lower-body injury. Aho played 20:30 in the team’s contest in Anaheim on Tuesday, but his head coach described it as a situation that has been bothering him for a bit.

Brind’Amour continued to say that if Aho doesn’t practice Friday morning before the team’s afternoon departure to Long Island, he will not play in Saturday’s affair.

The news comes just four days after his Finnish counterpart Teuvo Teravainen returned from an upper-body injury. #86 played over 15 minutes in both of the team’s games in California during the recent trip west.

“I felt pretty good. There weren’t really any problems and I felt pretty normal,” Teravainen shared following the practice. “It’s not fun to watch games, so I was just trying to get back in the lineup and feel good again.”

The team is eager to see him get back into the groove he was in just before having to come out of the lineup.

“I thought he was playing really well before he got injured. I think he’ll get it going too and we’re going to need him. We need everyone, obviously, but he’s a top player. We need him playing his top game,” Brind’Amour concluded.

Sign Up To Watch Carolina Hurricanes Hockey Through Bally Sports+