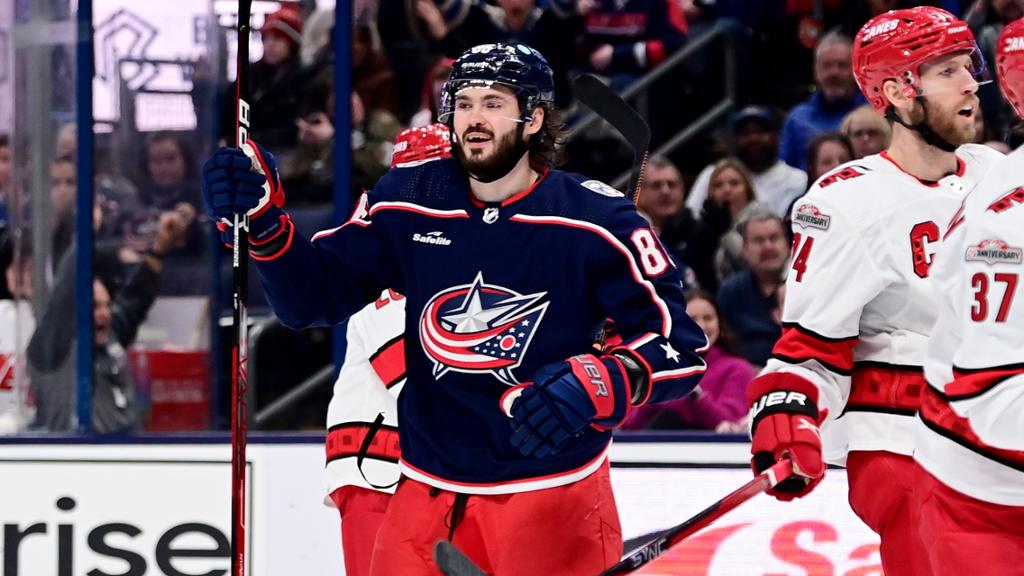 It would be a stretch to say Kirill Marchenko couldn’t miss on Saturday in Nationwide Arena.

He had a team-high eight shots on goal, and they didn’t all go in. But as he kept firing on the way to becoming just the sixth Blue Jackets rookie to post a hat trick in franchise history, Marchenko started to feel like anything he would put on net would go in.

Take his third goal, for example, which tied things in the third period and helped lead to the Jackets’ eventual 4-3 victory against Carolina. After spinning away from a check by Russian countryman Andrei Svechnikov along the wall and cutting toward the left circle, Marchenko let go a shot that snuck underneath the stick of goalie Antti Raanta.

It wasn’t a snipe by any stretch, but it was good enough to go in. And as Marchenko admitted after the game, after scoring twice on the power play in the second period, he wasn’t afraid to fire from any angle.

“No, I was just shooting,” he said when asked if he saw the hat trick goal go in. “Two goals, I just shoot. I’m like, is the net there? And just shoot. It’s working. I don’t know how, but it’s great.”

Savvy Blue Jackets fans have waited for the arrival of Marchenko for four years, as he was chosen in the second round of the 2018 draft with plenty of hype thanks to his goal-scoring ability. The Barnaul, Russia, native stayed in his home country the next four seasons to play for one of the top teams in the KHL, SKA St. Petersburg, before making the big decision to head to the Blue Jackets after last season.

Scoring goals has never been a question, as he had 27 in 80 games over his last two KHL seasons with SKA. While he thinks the game well and has an endless enthusiasm for being on the ice, Marchenko started the season with Cleveland of the AHL just to keep getting used to the fast-paced style of North America.

After filling up the net with the Monsters with eight tallies in 16 games, he came to Columbus, and his hat trick gives him eight goals in 15 games at the world’s top level. It’s not only the most among NHL rookies since his debut, it’s tied for fourth in the league this season for first-year players.

“Special night for him, right?” head coach Brad Larsen said after his hat trick. “We have been talking about his pace; tonight he was flying. That is a hard team to find space, so that is the encouraging thing, because they check well and are good skaters, and he is strong on the puck. I think he ended up with eight shots on goal. I mean he almost did it again there and got his fourth. So that’s a heck of a night for him, great to see.”

As Larsen said, Marchenko had more scoring chances in addition to his goals, with the first tally coming on a wraparound on the power play in the second period and his second on a one-timer off a feed from Kent Johnson just 1:36 after his first tally. He had a shot that surprised Raanta in the first period that nearly beat the Carolina goalie and led to a juicy rebound chance, and he used his speed to create a breakaway chance in the dying moments of the third period that Raanta turned aside.

Marchenko did get one more chance to impact the game and made the most of it, as he scored the first shootout goal in the team’s victory in the skills competition.

“I personally knew he was going to score,” linemate Cole Sillinger said. “I mean, when it’s going like that. I was hanging out beside Johnny and was like, ‘In the net,’ and then sure, it happens. He has the confidence to do a move, another move, and then lift it up over his pad. It was a big shootout goal for us to get us on the board, so it was good.”

Marchenko said he doesn’t usually prefer to lead off the shootout, but given how things were going, Larsen didn’t have to think hard to put the 22-year-old over the boards.

Video: The Blue Jackets speak to the media.

“I didn’t think I’d go first, but coach had me go first,” Marchenko said. “Usually I look at the first guy in the shootout and how the goalie plays, and then I think about what I want to do. But now I go first, I think, ‘Wow, OK.’ I didn’t know a great move, but I scored. It’s working. It’s good.”

Whether it was because Marchenko was celebrating Russian Orthodox Christmas or because he’s simply getting more and more confident at the NHL level, Saturday was a night to remember. Not only did he become the sixth CBJ rookie to notch a hat trick, he was the first rookie in the NHL to do so this year. In all, he’s just the second Blue jackets rookie after Matt Calvert in 2011 to tally six times in a seven-game stretch.

He’s not afraid to make a move or put pucks on net, and that was especially true in front of a sellout crowd Saturday.

“It’s more confidence, but after two goals, (I’m) just shooting,” Marchenko said. “I just close my eyes and keep shooting. To score three, wow, and to score in the shootout and win, wow. I don’t have any words for this moment.”

“It’s a dream for me. Just enjoy the moment.”