MLB players who need to stay healthy in 2023 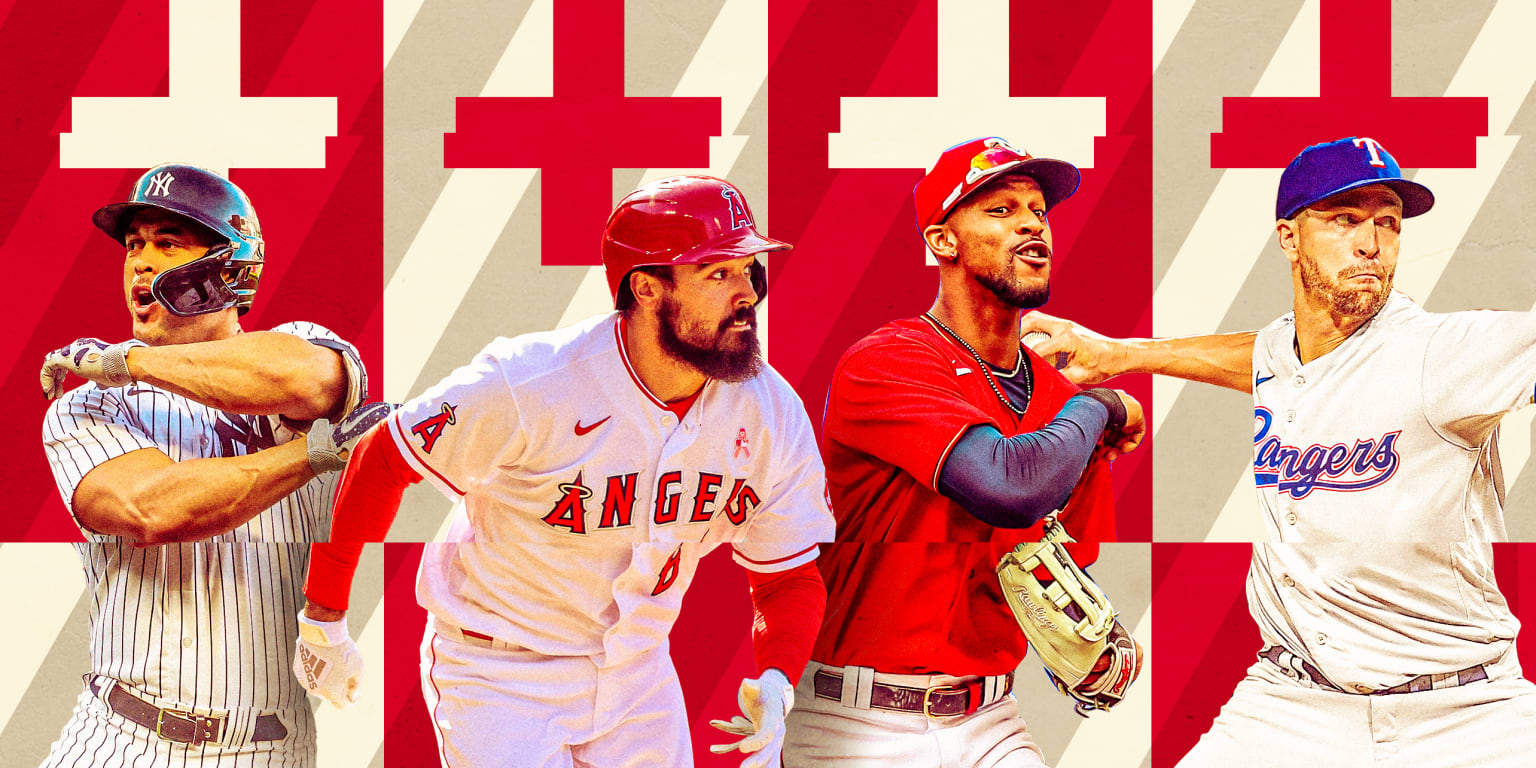 After undergoing Tommy John surgery in 2020 and enduring essentially two lost seasons, Verlander and the Astros agreed to a $25 million deal last March in the hopes that he’d be able to rediscover a semblance of his old self. The 39-year-old Verlander did that and then some, going 18-4 with a 1.75 ERA in 28 starts en route to his third Cy Young Award, while helping the Astros claim a World Series championship.

With Verlander’s historic comeback in mind, here are 12 players whose health will be an X-factor in 2023. Injuries hampered this group last season, but each has the ability to make a huge difference for his respective club in the new year. (Each is listed with his 2022 stats).

At first glance, Stanton’s name being on this list might seem a little odd since he earned his fifth career All-Star nod in ’22 along with earning MVP honors at the Midsummer Classic. But it’s what happened after the All-Star Game that resulted in his inclusion here. After hitting .237 with 24 home runs in the first half, Stanton went ice cold in the second half, batting an anemic .151 with seven home runs, a slump that was due in large part to a left Achilles tendon injury that kept him on the shelf for a month.

The good news for Stanton is that he may be able to get off his feet more next season. After playing more than 300 innings in the outfield in ‘22, he should be a near full-time DH in ‘23 if the Yankees can add another corner outfielder to the roster alongside Aaron Hicks and Oswaldo Cabrera. A healthy Stanton would be huge for a Yankees offense that too often depended entirely on Aaron Judge a year ago.

For 10 years, Kiermaier provided Rays fans with countless home run robberies, incredible catches and jaw-dropping moments. Now, he’s looking to take that excitement north of the border after signing a one-year deal with the division rival Blue Jays. But, for that move to work out, he’ll first have to get healthy, as the rangy center fielder’s 2022 season ended in July when he had surgery on his hip.

A three-time Gold Glove Award winner, Kiermaier has been worth 71 Outs Above Average since 2016 — the highest mark in baseball among outfielders. A Blue Jays outfield that was shaky defensively last season now has the chance to be excellent with Kiermaier playing in between George Springer and trade acquisition Daulton Varsho, provided that Kiermaier returns to form and stays on the field.

The 2021 season was Zunino at the height of his powers, as he mashed a career-high 33 home runs while accumulating 7 defensive runs saved. Unfortunately for Zunino, he wasn’t able to build on that success last year, last playing on June 9 before undergoing surgery to correct thoracic outlet syndrome.

While it’s no guarantee that Zunino will be able to regain his 2021 form after signing a one-year deal with the Guardians, his power from behind the plate would be a boon to a Cleveland franchise that has struggled to find production from its catchers in recent years. (For reference, Zunino has hit 42 home runs since the start of 2020. In that same time frame, Guardians catchers have combined to hit 34 home runs total. They posted a .533 OPS with 10 homers this past season).

If the Twins are going to rebound from their second straight disappointing season and return to the playoffs in 2023, a healthy Buxton is almost certainly a requirement. Since ’21, the Twins are 76-69 (.524) with him in the starting lineup and 75-104 (.419) in all other games.

To call the start of Rendon’s time with the Angels a disappointment would be an understatement. Signed to a seven-year, $245 million deal after the 2019 season, Rendon has only played in 157 of a possible 384 games (41%) across three seasons, batting .252 with 20 home runs and 89 RBIs.

The good news is that while Rendon underwent right wrist surgery in June, he ultimately returned in October from what was supposed to be a season-ending procedure. With Mike Trout now in his 30s and Shohei Ohtani one year away from free agency, 2023 could end up becoming a make-or-break chance for Rendon and the Angels to snap the team’s eight-season playoff drought.

You can’t talk about deGrom without talking about his arm issues. While the 34-year-old hurler has become one of the greatest pitchers in the Modern Era, he’s also missed large amounts of time due to injuries, and in turn has only worked 156 1/3 regular-season innings since the start of 2021.

Still, his presence in the Rangers’ revamped rotation gives them a fighting chance against the Astros and Mariners in the AL West. If deGrom makes 30-plus starts like he has four times before, it would go a long way toward getting Texas back to the postseason.

Four seasons ago, Soroka looked destined to become a perennial Cy Young Award candidate, as the then 21-year-old went 13-4 during the 2019 season with a 2.68 ERA in 174 2/3 innings and also became the youngest Braves pitcher to be named to an All-Star team. Soroka’s career took a turn in 2020, however, as he sustained a season-ending Achilles injury in his third start of the season.

A year later, his season ended before it could even get off the ground when he re-tore his Achilles walking into the home clubhouse at Truist Park. Soroka made six starts in the Minor Leagues last season — his first game action in two years — and should be healthy and set to go for Spring Training this year. If he is, Atlanta will have another weapon in what should be a hotly contested NL East race.

When the Marlins signed Soler to a three-year, $36 million contract last offseason, they did so in the hopes that he’d provide the power and flair for the dramatic that he displayed during Atlanta’s 2021 World Series run. Instead, Soler struggled at the plate before his season came to an end in July due to pelvic and back issues.

In November, Marlins general manager Kim Ng said that Soler should spend more time at DH in 2023, which could help the 30-year-old slugger get some rest during the season. A Miami offense that scored the third-fewest runs in MLB badly needs him to make an impact.

Flaherty’s 2022 season was one of stops and starts. After missing the first three months of the season with a right shoulder injury, he returned in June for three short outings before his shoulder sent him back to the injured list. A little more than two months later, he returned for five September starts, posting a 4.00 ERA in 27 innings.

That solid showing is an encouraging sign for Flaherty, who was one of the best pitchers in baseball in 2019 (fourth in NL Cy Young Award voting) but has struggled with injuries and consistency since. The 27-year-old has easily the highest ceiling of any pitcher in the Cardinals’ rotation, and he has a chance to make a big statement in his final season before free agency.

The MLB ERA leader in 2016, Hendricks posted a 3.12 mark from 2014-20 but 4.78 in two disappointing seasons since. Last year, he only managed to throw 84 1/3 innings before suffering a season-ending shoulder strain in July.

Even with those strong seasons, Haniger’s availability is still a concern, as he only played in 63 games in 2019, missed all of ’20 due to multiple surgeries, and only played in 57 games last season because of a right high ankle sprain. Haniger will be key to a potential Giants rebound in ’23.

When Tatis does make it back to the Padres’ lineup (he’s still under suspension until April 20) it’ll probably be as an outfielder due to the team’s signing of Xander Bogaerts to play shortstop. Last season the Padres made it to the National League Championship Series without Tatis. Could his return be the final piece needed to bring a championship to San Diego? Much will depend on whether he can stay on the field once he is reinstated.