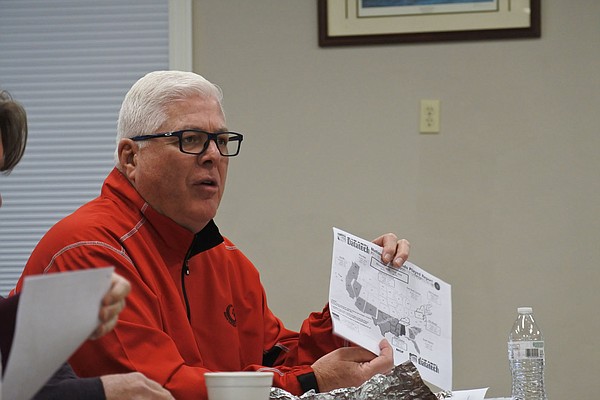 FORT SMITH — Sebastian County’s Ben Geren Golf Course managed to generate more revenue last year than it did the year before despite having to close because of two months of inclement weather.

Wanstreet said this came after a “disappointing” December, something he attributed to the freezing weather that hit the River Valley that month.

Wanstreet said the park’s greens had to be covered for nine days in December to prevent them from succumbing to the cold and dying. The golf course does this when temperatures reach about 28 degrees Fahrenheit for an extended period of time.

However, the strategy prevented play from taking place during those days, which caused the park to miss out on revenue it was able to garner during the same month in 2021 through things such as green fee passes, golf cart rentals, its driving range, pull carts and club rentals, as well as sales of concessions and pro shop merchandise.

“I believe that 13 is, by far, the lowest month since I’ve been here,” Wanstreet said.

Wanstreet said the golf course received heavy rain throughout November that impacted revenue for that month as well. However, this was part of a wider trend, as opposed to being limited to Ben Geren.

A report provided by Golf Datatech, a Florida-based market research company, shows the overall number of golf rounds played on a nationwide level in November in public access and private facilities was down by 9.5% compared to the rounds played November 2021. The golf rounds played in the southcentral region of the United States was down by 16.7% for the same period of time, with Arkansas, Louisiana and Mississippi specifically seeing a downturn of 31.1%.

Wanstreet noted the report also indicated the southcentral region saw a 181% increase in precipitation that month compared to November 2021.

“For the month, that area, Arkansas, Louisiana, Mississippi, had one of the biggest decreases in the country, but if you look at the year-to-date, it was still only down 1.3[%],” Wanstreet said.

In comparison, per Golf Datatech, the national number of golf rounds played year-to-date through November was 2.8% less than the number played during the first 11 months of 2021.

Jay Randolph, county park administrator and golf course superintendent, said Ben Geren had a good year despite these weather-related difficulties. He also remarked the golf course has been “off to the races” with the sale of annual passes for this year.

The budget the Sebastian County Quorum Court adopted for 2022 included $862,569 for the golf course and pro shop. It was paid for from the county general fund.

Ben Geren Golf Course has three nine-hole greens for a total of 27 holes. These include the Silo, Magnolia and Willow courses.