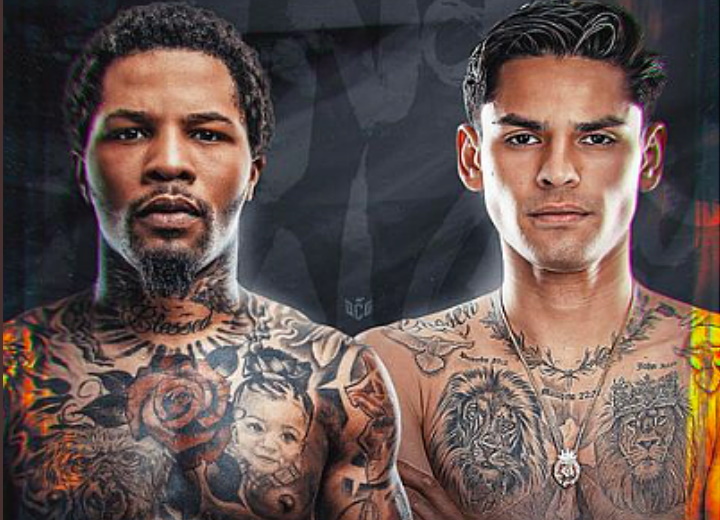 In a ring. Together. With gloves and trunks.

Though there’s been far more talk recently about fights that don’t get made than ones that do, it appears – gasp! – as if this one’s actually got a chance to get past the SOUCRES SAY stage.

Which means, rather than preparing to assess blame to one side or the other for why it didn’t get done, we may have to get to the business of figuring out who might actually win when it does.

Though neither fighter holds a worthwhile title in any weight class, the prospect of them meeting, even at a catchweight, has created significant anticipation. Largely because they’ve combined for 45 KOs in 51 wins and are part of a group that may ultimately compete in a series of bouts along the lines of (though certainly on a much less prestigious scale than) the Four Kings era in the ’80s.

A victory would enhance the winner’s street cred and move him to the front of the line for subsequent fights at 135 or 140. Davis is the WBA’s dubious “world” champion at lightweight and Garcia is listed as the organization’s No. 1 contender, and the Oscar De La Hoya-prepped product is also ranked 11th at 135 by the IBF and seventh by the WBC at 140.

As for their in-ring credentials, neither will be remembered as a classic boxing stylist.

Garcia is taller and will have an edge in reach – and he does fight in an upright stance – but he’s much more likely to rely on physical skills like speed and power than distance-controlling measures. In other words, combinations of left hooks and right hands to the head and body are more likely than prolonged stretches of jabbing and moving against a foe far subtler than his nickname might indicate.

Davis is no free-swinging neanderthal. Instead, he’s economical and patient, gradually working his way out of a defensive shell and into an offensive rhythm while working both the body and head.

He’s ended seven “title” fights in the sixth round of beyond, including Saturday’s stoppage of Hector Luis Garcia that came when the rising 130-pounder stayed on his stool to begin Round 9.

Perhaps the biggest question coming out of Saturday’s fight was, if Garcia 2.0 lands the same shots as Garcia 1.0 did before meeting his demise, what exactly will become of Davis?

“King Ry” is accurate with his shots and has the speed to put several together.

He’s got a sneaky powerful lead left hook from a right-handed stance and is just as willing to pursue finishes with shots to the body as the head. And though fighting a lefty will be a task, his hand speed is on a level that Davis has rarely, if ever, had to contend with.

Meanwhile, Davis has got decisive single-shot pop, as shown by the uppercut that vaporized Leo Santa Cruz, the counter left that ended Rolando Romero and the hard left that had Hector Luis Garcia not knowing where he was on the way to his impromptu weekend surrender.

Whether Ryan Garcia can do decisive damage will be the fight’s most important question, because if Davis lands his best shots, he’ll get his KO.

Also worth wondering about Garcia is whether he’ll be ready for the moment.

Though he’s boxing’s king of social media and has been packaged for the big time by De La Hoya’s Golden Boy Promotions apparatus might make you think he’s already handled stardom.

But decisively handling the likes of Javier Fortuna and Emmanuel Tagoe and beating a proven talent like Davis are a fair bit different. He won’t be a clear-cut favorite and it’ll be interesting to see how he reacts if and when “Tank” is still standing and coming forward after he’s landed the shots that felled others.

Why is this fight so interesting?

Because pretty smart people can see it going either way.

Is it possible to envision Garcia blowing Davis away with speed and connecting enough times to stop a physically smaller opponent? Sure. But is it equally possible that Davis could overwhelm Garcia with the sort of pressure he’s not experienced and grind him into mulch down the stretch? Yes.

Here’s how it’ll go, according to the Tuesday staff.

Garcia starts early, works on the front foot, and lands the majority of the offense. But he doesn’t land the sought-after fight-ender, which enables Davis to follow his typical M.O. and shift the narrative to one where he’s moving forward, initiating exchanges, and getting the payoff from early body work.

He either makes things one-sided enough to score yet another late stoppage or gets enough worthwhile accomplished to work his way to a decision – split, majority, or unanimous (it’s Vegas, after all) – by something in the 7-5 or 8-4 range.

Sorry Oscar. I hope we can still be friends.

NOTE: Fights previewed are only those involving a sanctioning body’s full-fledged title-holder – no interim, diamond, silver, etc. Fights for WBA “world championships” are only included if no “super champion” exists in the weight class.

Lyle Fitzsimmons has covered professional boxing since 1995 and written a weekly column for Boxing Scene since 2008. He is a full voting member of the Boxing Writers Association of America. Reach him at fitzbitz@msn.com or follow him on Twitter – @fitzbitz.