Alexandrov embracing role that will make him successful in NHL 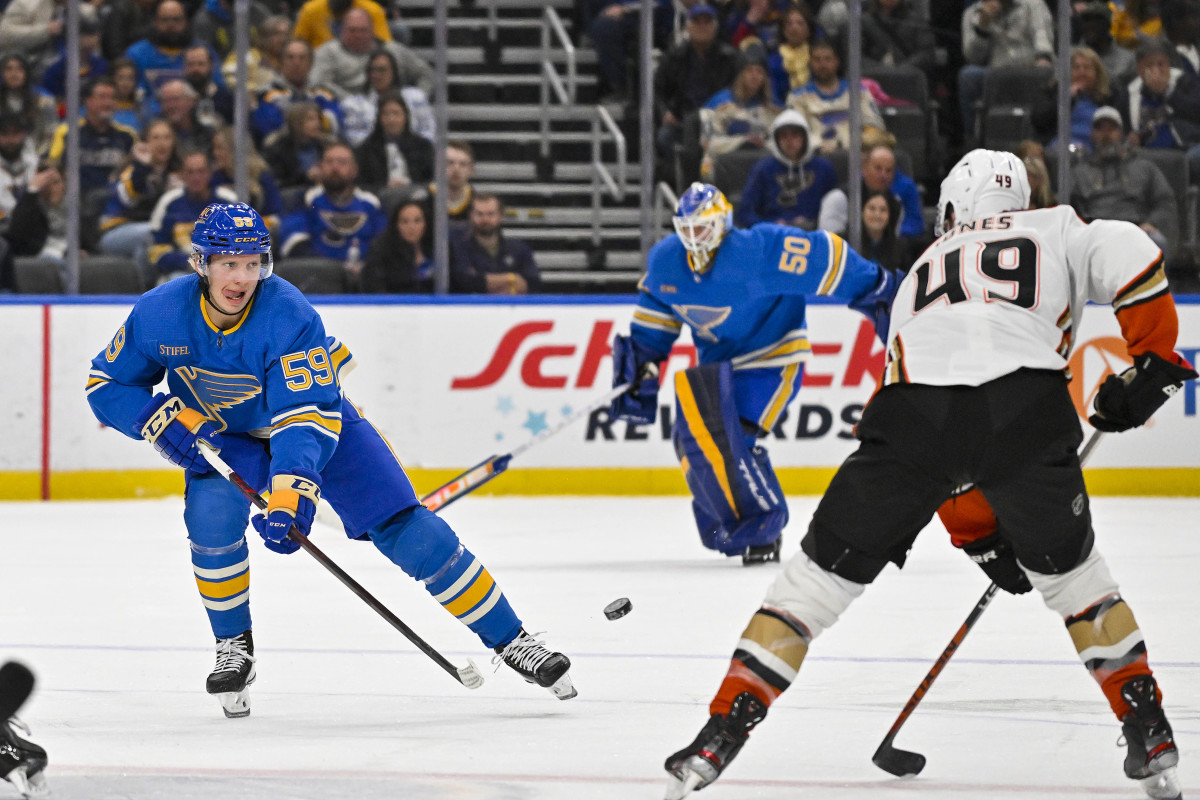 ST. LOUIS — Some of the more glowing reviews coming out of training camp this past September and October from Blues coach Craig Berube were how good of a showing Nikita Alexandrov had.

So good that those in the media covering the team thought that Alexandrov had made the opening night roster, which at the time, would have been a move nobody at the start of camp saw coming.

But after a 6-0 thumping of the Chicago Blackhawks in the final preseason game on Oct. 8, a game in which Alexandrov scored his second preseason goal, the center was assigned to the Springfield Thunderbirds of the American Hockey League.

The adrenaline that had been built up took a deep plunge. Or did it?

Alexandrov, 22, as low key as any of the Blues skaters, actually took that news well.

There was no pouting. There was no anger, at least not on the surface, but more determination than anything.

“Whenever I got the message that I got sent down, obviously that meant that I wasn’t ready for it yet, so I went down with the attitude that I’ve got to go down there, work hard and play every game the right way and keep improving my strength and my weaknesses,” Alexandrov said.

It was the right mindset, the right attitude, even though the Burgwedel, Germany native of Russian descent didn’t like the decision, and rightfully so. After all, who wants to take a step down when you’ve reached the pinnacle?

But Alexandrov would go to Springfield, play big minutes, in all situations and is now on his second recall with the Blues down a number of healthy bodies.

“If you play like I do in the AHL, a lot of minutes, you have the flow in the game and everything,” Alexandrov said. “Here, I get limited minutes but every shift I get out there, I try to bring 100 percent and try to do good things on the ice and help the the team and provide some energy.”

When he originally was sent down, Berube wanted Alexandrov to focus on one particular part to the game.

“Pace … playing with pace,” Berube said. “The game’s fast, you’ve got to play with pace. That’s not always just your skating or anything, it’s just playing with pace, understanding where you’ve got to be, anticipating, all that kind of stuff and he does that now. Before, he wasn’t doing it. That’s a big part of the game. I like his brains out there, I like his physicality out there and he’s got good puck skills.”

Alexandrov went to Springfield and had four goals and four assists in nine games before being recalled in early November.

“He’s a lot more confident, a lot more comfortable in his game,” said Blues defenseman Steven Santini, a teammate of Alexandrov’s in Springfield the past year and a half. “He’s starting to a lot of the dirty work too, like last night going to the net hard, he’s finishing hits on the forecheck. It seems like he’s always in the right place now. He’s just maturing and credit to him for working hard and getting better every day. … He’s playing the right way.”

Alexandrov, who scored his first NHL goal this past Saturday against Jake Allen and the Montreal Canadiens, scored his second goal in three games on Tuesday when the Blues overcame a 3-1 deficit to knock off Calgary 4-3 in overtime. Each goal was of the dirty, gritty variety, crashing the net and potting a rebound.

It’s not the way Alexandrov was used to playing coming out of juniors when he was playing with the Charlottetown Islanders before the Blues made him their top pick in the 2019 NHL Draft (second round, 62nd overall).

Alexandrov averaged 21 goals and just under 49 points per season with the Islanders in three seasons, then went to Finland to play for KooKoo in the Liiga League. He was counted on as an offensive forward then.

“When I saw him out of juniors, I saw a smooth hockey player,” Berube said. “Effortless. That’s what I saw and I saw the skill. I saw the puck skills and things like that, but pace was a big thing for me.”

“Just kind of get used to it,” Alexandrov said. “Obviously I score way different goals than I did in junior. You have to adjust. You have no other way. You’ve just got to be the player that they see in you here.

“It was definitely tough on me. Obviously after I got drafted, they told me right away what they see in me. It starts from there. I had one year in juniors and then I had one year in Finland, one full year in the AHL last year. That’s a lot of time to get used to it. They gave me the time. They stayed patient with me and I’m thankful for that.”

Alexandrov played in nine games with the Blues in his debut recall to the NHL and had an assist but made himself known to not only the coaches but his teammates. And when he got sent back to Springfield, the game slowed down for him. He still leads Springfield in goals (11) in 22 games and is fourth in points (18).

“I just felt a little more confident in myself,” he said. “Going down the second time, I think they really liked me before when I was up here. So I tried to be confident, play my game.”

Now that he’s been recalled again, Alexandrov is finding it more naturally with each and every game. He’s only 14 games into his NHL career with two goals and two assists, but he’s the anchor of the fourth line right now along with fellow Russian Alexey Toropchenko, Tyler Pitlick and whoever else may be their linemate until the Blues get healthy.

“It’s important that he understands what his role is right now,” Toropchenko said. “He’s playing the right way, simple game, hard from forechecks and pretty smart.

“It’s all about work. In Springfield, he worked his … he worked really hard. Hard work pays off. At practices, we stay longer to practice some plays from the corners, some rims, faceoff plays. He got better and better. If you practice, you will get better. If you don’t do anything, you will be in the same position.”

Chances are Alexandrov will be sent back to Springfield when the Blues get healthier, but it won’t be because he’s not NHL-ready. If anything, the more he plays, the more he shows he’s indeed becoming NHL-ready. And by accepting the role the coaches here feel he’s capable of embracing at this level will only continue to enhance his standing.

“Obviously playing every game like you’re supposed to helps a lot and you just get used to it now. It’s just automatic,” Alexandrov said. “I’m trying to be a competitive guy, being physical, knocking guys off the puck. That’s my style of game. I’m just trying to do the right things. Obviously if you do the right things, you get rewarded.”