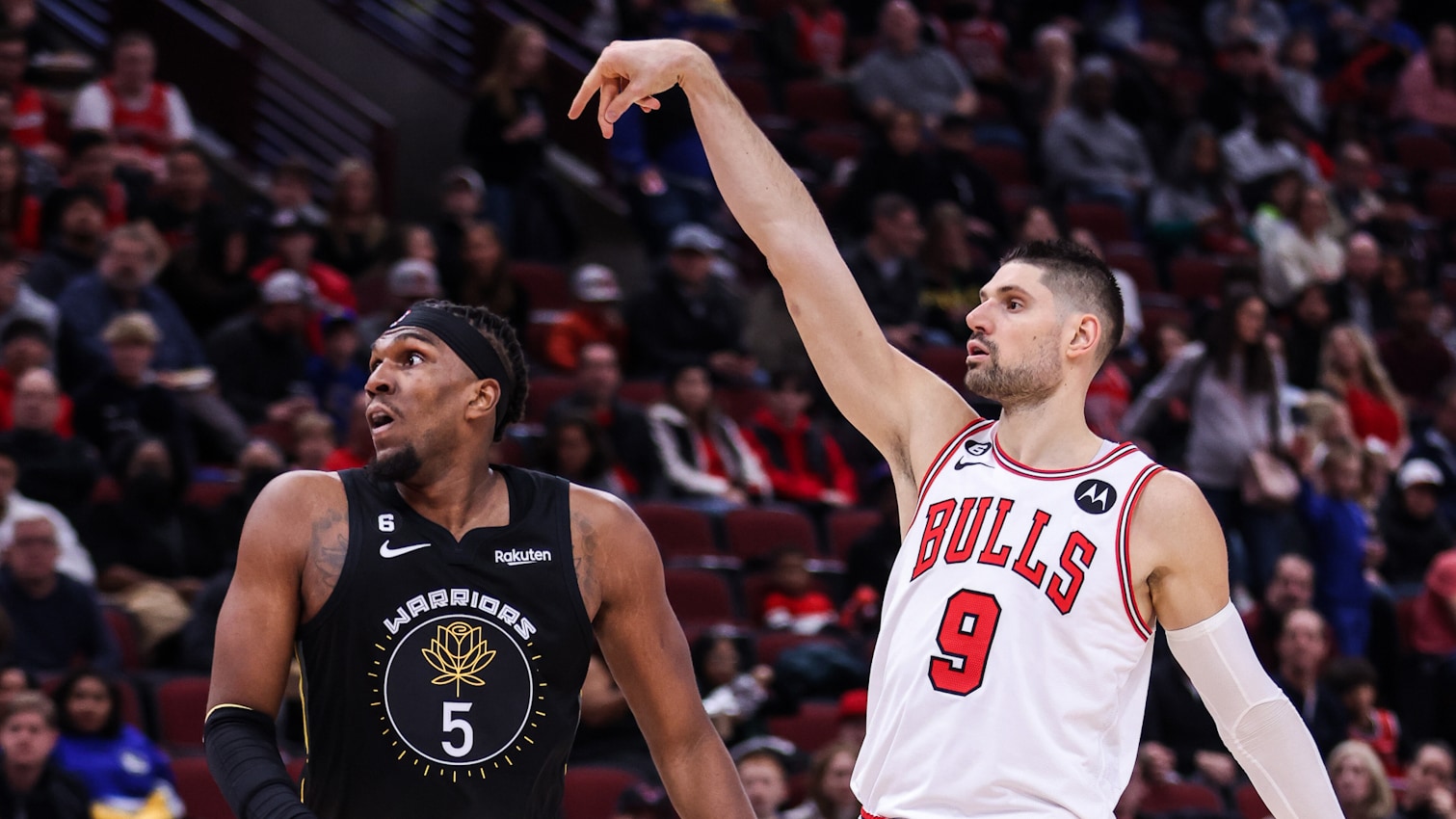 Nikola Vučević had the kind of game Sunday in the Bulls 132-118 suffusion of the former NBA champion Golden State Warriors that if it were a game show, he probably wins you a trip to Paris.

And so are the rest of the Bulls in a much better mood after Vučević tied his career high—set previously against the Bulls when he was with the Orlando Magic two years ago—with a heck of a show in this game, 43 points along with 13 rebounds, four assists and four steals in a performance so dominant against the staggering champions that Vučević’s statistical combination with the points, five threes, steals and rebounds was a first in the NBA this season.

“We played in a way that I was really able to show my strengths and my qualities,” said Vučević, serenaded with a “Vooch” melody as the big man helped close out the Warriors with 16 fourth quarter points and two early threes to give the Bulls the needed separation from Steph Curry and Klay Thompson. “It was great for me to take advantage of it and have a good night. But it was also important because we needed this win. I know I’m capable of it. I know how good I am, especially on the offensive end. It’s just me finding my spots and playing that way.

“I got going early,” Vučević acknowledged about his dozen first quarter points in a raucous 35-20 Bulls first quarter. “You feel it. You get this feeling that’s within yourself that it’s gonna be your night and you play off your teammates. I was just getting in my spots, really. I was playing in a way that really fits my game. It all happened within the flow of the game. I was involved a lot, and I was able to be myself. I was able to get going because we really moved the ball. We really played aggressively offensively and I was able to get into my spots.”

So the seven-hour ride probably will feel a bit smoother with the Bulls moving to 20-24 to end a three-game losing streak. Bulls coach Billy Donovan indicated that star scorer DeMar DeRozan probably will return from a quad injury for the Detroit matchup.

DeRozan missed his third straight game Sunday, but this time it was no problem after Bulls losses to Washington and Oklahoma City.

With Zach LaVine scoring 27 points and again plowing his way to the free throw line for 14 attempts, Coby White still sparkling off the bench with 15 points making six of seven shots and Alex Caruso doing a lockup job on Curry with 12 points and getting nine rebounds and seven assists, the Bulls broke away from a 62-59 halftime deficit with Vučević and LaVine scoring nine points each in the third. And then with Vučevićs kick start threes led by double digits much of the fourth quarter.

The Bulls dominated at the rim with a 57-34 advantage and harassed Curry into eight turnovers and an exhausting afternoon with just 20 points and three of 10 threes. Klay Thompson, who loves shooting in the United Center, made eight of 15 threes and had 26 points. But Draymond Green in a season long pout was a whopping minus-24 on plus/minus and Andrew Wiggins had a desultory 11 points.

“I think the first two games we played (without DeMar), it was an adjustment for everyone, and we got stagnant a lot of times,” Vučević said. “We were playing a little out of control in trying to figure it out without DeMar instead of kind of slowing the game down and playing within the strengths of whatever players are out there at that moment. It wasn’t a good showing offensively for us the last two games. We didn’t really play to our strengths; whereas, tonight the ball was moving. We were attacking, getting downhill, driving and kicking. That’s how I got most of my points. I didn’t really have a lot of points where I was going one-on-one.

“It feels great,” Vučević added in tribute to the NFL sideline reporters. “When you have a 40-point game, it’s always great. Obviously for me, it was an adjustment going from being the main focus offensively, being the main scorer (with the Magic) to kind of being the third option and figuring it out. Also being a big man, you depend a lot on other guys. So some games for me, I’ll get 15 or 20 shots. And some games it will be like seven or eight. So for me, it’s an adjustment.”

And lately a lot of questions with the Bulls still trying to climb that rock wall of a .500 plateau.

Vučević’s name comes up probably the most, at least in media speculation, about whether the Bulls should, will or can make a personnel move before the Feb. 9 trading deadline. Vučević will be an unrestricted free agent after the season with no guarantee he will resign with the Bulls. So trade him and get something? Make a move to recoup some of the draft picks the Bulls yielded in the move to acquire Vučević?

The trade has been a much debated topic, though it did serve its purpose in helping make the Bulls relevant at a time of continued team deterioration. And then Lonzo Ball was injured, and we’ve heard too much about that.

So as the Bulls drift toward the bottom of the play-in tournament standings—though really not far out of playoff contention in the minefield that is the firmament of the Eastern Conference—Vučević’s name becomes the frequent fodder in the relentless speculation about the roster musical chairs. With DeRozan and LaVine the main cogs in this Bulls mechanism, Vučević has had to sacrifice.

But with DeRozan still out and LaVine with a hand injury that has limited his perimeter shooting, the thinking goes, who can’t use a skilled big man capable of scoring 40-plus points? Perhaps a team like the Warriors with the modestly skilled and sized Kevon Looney? Who Vučević tuned up, as it were. The Warriors play small even compared to the Bulls, and it seems no formula for a repeat title performance.

The Warriors weren’t favorites this time last season, so one never knows with that kind of championship DNA and Curry.

But with a 4-17 road record and losing four of their last five with Curry back from injury, the Warriors don’t come at you so loudly anymore.

Though no one says much, Green’s preseason fight with teammate Jordan Poole does seem to have left a mark. Like most things, it seems to be about money, which possible free-agent-to-be Green doesn’t appear to be getting after G-league grad Poole did. Then there are the kids the Warriors acquired with the big draft picks when Curry and Thompson were injured, but none seem to have developed. Big man James Wiseman rarely plays. So while Curry still has that baby faced smile, many of his other parts have to be feeling the wear of not only carrying the Warriors for so long but basically changing the way the game is played in the NBA.

We don’t exactly love him for that, but he’s still a joy to watch.

Which Vučević was Sunday, and which also raised the oft-mentioned question about why the Bulls don’t play through the big man more often.

But if you have a big man, why not?

Sorry, I was having a conversation with myself again.

“He been an elite offensive player his whole career,” noted Donovan. “We’ve got to establish him and not just to score. He’s a good facilitator. He doesn’t force a lot of shots. He’s really a good ball mover Even if he didn’t score it’s important he’s involved in the game for us offensively. We’ve got to try to establish him as much as we can.”

So put Vučević in a position like he was in Orlando where he was the main option?

It’s not going to happen when you have scorers like DeRozan and LaVine.

It’s what the Bulls probably mean about that process of getting accustomed to one another, and everyone says, hey, it’s almost two years. And they say it takes time, and maybe that explains it a little bit. Donovan always has commended players like Vučević and White for how much they’ve sacrificed. Though should they? It perhaps also helps explain something about all those wins over teams with titles and Finals appearances like the Warriors, Bucks, Heat and Celtics and the losses to, OK, you know who. Yes, it’s still a process.

The Bull turned it around in the third quarter with Curry limited to just one shot attempt—who says it’s not a defensive league?—and the Bulls ahead by six by the end of the quarter.

“You could see from the get go,” said LaVine. “He had it rolling. He had the hot hand. We played off him. That’s what you can do when you’ve got a guy like that. It was great. He had it rolling. He said he hadn’t felt like that in a while. It was great he can still show everybody it takes a little sacrifice for the greater good. He’s a two-time All-Star and one of most skilled bigs. He came in a little more aggressive this year. That’s what he does when he gets it going.”

That’s a man who can light it up. Welcome to the City of Lights, Vooch and pals.

The contents of this page have not been reviewed or endorsed by the Chicago Bulls. All opinions expressed by Sam Smith are solely his own and do not reflect the opinions of the Chicago Bulls or its Basketball Operations staff, parent company, partners, or sponsors. His sources are not known to the Bulls and he has no special access to information beyond the access and privileges that go along with being an NBA accredited member of the media.