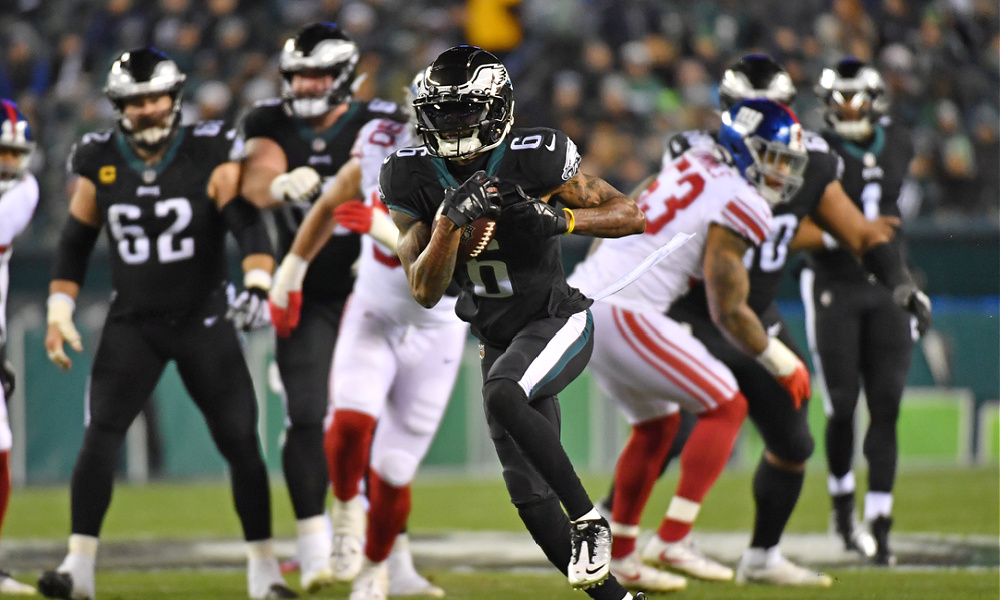 The first predictions, early lines, and quick analysis of the next batch of NFL Playoff Divisional round games.

Well that was fun, but holy (bleep) does this next round of the NFL Playoffs look amazing

Even the blowouts – San Francisco over Seattle and Dallas over Tampa Bay – were entertaining in the Wild Card round of the NFL Playoffs.

It would’ve been interesting to see what the Minnesota offense could’ve done at San Francisco, but getting Giants and Eagles with an NFC Championship appearance on the line is special. Dallas at San Francisco? For people of a certain age, that just sounds massive.

Bengals and Bills? This HAD to happen, and let’s go Jaguars – let’s see that attack against Kansas City (and help me with my belief that Jacksonville might be this year’s Cincinnati).

When our game previews come out – after the news of the week happens and there’s even more of a deep dive – these can and might change, but …

First Thought Instant Analysis: We can’t have another No. 1 AFC seed go out right away, can we?

Kansas City is rested, it’s got the weapons that last year’s No. 1 AFC Tennessee didn’t have, and it should be able to take what Justin Herbert and the Chargers did against Jacksonville to another level.

But the Chief defense doesn’t really take the ball away.

That shouldn’t matter since Trevor Lawrence should be good for at least one big mistake on his own, but it really comes down to this …

How fast can Lawrence settle in?

He’s been so hyped and so amped and so off the last few games that he just needs to get off to a decent start and not try to do a gajillion things at once on each play. That, and he needs to read the Chief defense far, far, far better than he did early against the Chargers.

Lawrence will be good, the Jaguar offense will be great, and … Brandon Staley isn’t coaching the Chiefs.

It’ll be a back-and-forth fight with a ton of scoring and a whole lot of big plays, but this week the Jaguars aren’t going to be able to get over the big run from Patrick Mahomes and company coming in the second quarter.

NEXT: New York Giants at Philadelphia Eagles Divisional Round

First Thought Instant Analysis: Just like the AFC … We can’t have another No. 1 NFC seed go out right away, can we?

Also just like the AFC’s situation last year, the NFC No. 1 is far better than 2022 version – Green Bay.

That was one miserable Viking defense that got ripped through, and even though I thought Kirk Cousins and the O were about to kick it in – the signs were sure there that Minnesota was a squishy-soft 3 seed.

Daniel Jones won’t repeat his Lamar Jackson impersonation of last week, the Eagle offense will be far sharper and more balanced than Minnesota’s was, and the Giants won’t be able to control the game on third downs.

NEXT: Cincinnati Bengals at Buffalo Bills Divisional Round

First Thought Instant Analysis: I thought both teams would come roaring into this. Instead, we were wayyyyyyyyy too close to getting Dolphins vs Ravens.

It’s too easy to assume both teams had their heads on the next step and the matchup everyone was waiting for over the last few weeks … so let’s assume that.

Here’s the key thing that’s missing from the narrative, though – Buffalo has been sort of just okay.

I know, I know, I know, it won a ton of games in a row, and of course everything changed with the Damar Hamlin nightmare, but it seems like everyone forgot just how nasty last year’s team was going into that game against Kansas City in the Divisional Round.

The offense was amazing in 2022, but it was the defense that really kicked it in when needed.

Here’s the other key thing that’s missing from the narration – Cincinnati has been sort of just okay.

I know, I know, I know it won a ton of games in a row, and of course everything changed with the Damar Hamlin nightmare, but it seems like everyone forgot just how nasty last year’s team was going into that game against Los Angeles in the Super Bowl.

Again, I’ll dive deep in the game previews, but where’s the great offense Cincinnati got by this year? Kansas City – of course. That’s about it – and don’t say Tampa Bay – since losing to Dallas early in the season.

This won’t be the insane firefight the ill-fated Monday Night game seemed destined to become, but it’ll be close.

NEXT: Dallas Cowboys vs San Francisco 49ers Divisional Round

Brock Purdy was magnificent in the win over Seattle, and he sure as shoot doesn’t play like the moment is too big for him, but at some point this fever has to break, doesn’t it?

He hasn’t had to outduel anyone like Dak Prescott.

Tua Tagovailoa … okay, maybe. No, I’m not giving you Tom Brady – actually, I am, but that Buccaneer offense was so mediocre.

Jarrett Stidham? Geno Smith twice – with all due respect to the most accurate passer in the league? David Blough? But Purdy doesn’t play defense, so …

Who has this killer San Francisco defense gone against that’s anything like what Dallas is bringing? Kansas City lit this bunch up like a Christmas tree that’s still cranking in mid-January in my neighbor’s living room for all to see.

I might change my mind on this when the real prediction and preview goes up. For now, 1) Dallas is the better team. Really. 2) Dallas was handed the awful break of a short week. It played Monday night. San Francisco played at home on Saturday.

The 2.5 days of extra rest over a team that played 3,000 miles away – a MASSIVE unfair break considering Buffalo is a 2 seed and didn’t get that cookie – will be a huge deal.