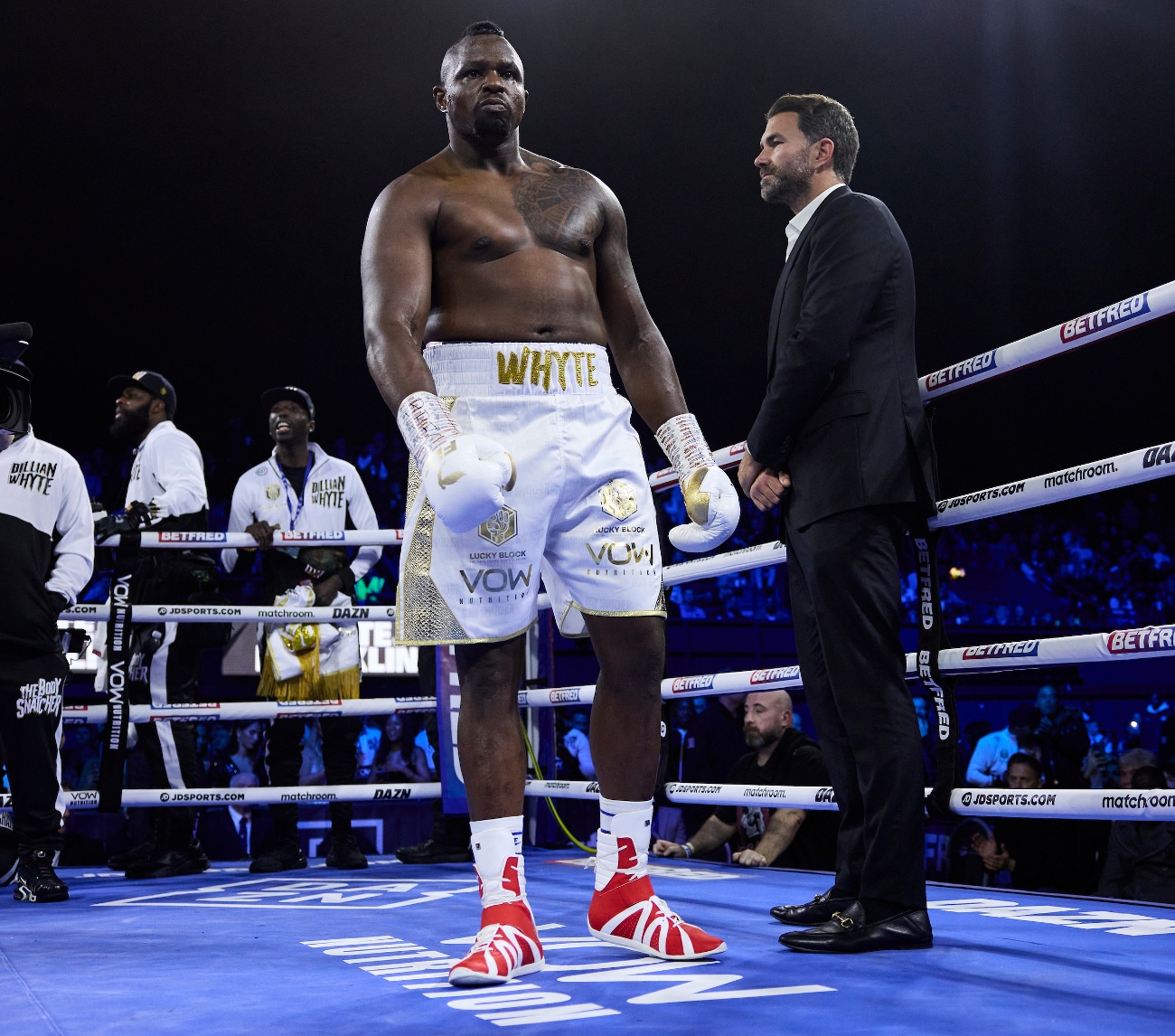 By Jake Tiernan: Dillian Whyte vs. Otto Wallin is possible for April in a heavyweight match-up that will lead to the winner facing Anthony Joshua in a lucrative fight in the summer.

Mike Coppinger reports that the promoter for the 6’6″ Wallin (24-1, 14 KOs), Dmitry Salita, is exploring the fight with the former heavyweight world title challenger Whyte (28-3, 19 KOs).

It’s questionable whether the 34-year-old Whyte will choose to take this risky fight against Wallin because if Dillian loses, he can forget about getting the big-money rematch with Joshua that he’s hoping to get in July in a stadium match.

Whyte & Wallin were scheduled to fight two years ago in October 2021, but Dillian abruptly pulled out of the contest, complaining of having a shoulder injury.

Interestingly, Whyte quickly signed to fight WBC champion Tyson Fury for a bout in April 2022 and was wiped out in six rounds.

Many boxing fans believe Whyte was NEVER injured and that he pulled out of the Wallin fight once he realized he was in a position to get a big payday against Fury.

Will Dillian back out again?

If Whyte takes the Wallin fight, there will be many boxing fans counting the days until he suddenly gets injured and pulls out like he did the last time he was supposed to fight the big Swedish fighter.

A heavyweight fight between Dillian Whyte and Otto Wallin is being explored for April, promoter Dmitry Salita tells ESPN. The bout was originally set for Halloween 2021 before Whyte withdrew from the bout with an injury. Simply at exploration stage between Salita and Matchroom.

With the rematch with Joshua waiting for Whyte in July, it’s impossible to think that he’ll take on a quality fighter like Wallin.

There’s a lot of loot for Whyte to get in a rematch with Joshua, and if all he has to do is sit on his sofa at home and wait until July to scoop up the dough, why would he risk it if he doesn’t have to?

Unless Joshua’s promoter Eddie Hearn insists that Whyte take a quality opponent to earn the Joshua fight and to put distance between Dillian’s horrendously bad performances against Franklin & Fury, it’s not feasible to believe he’s going to willingly show initiative on his own to go take a risky fight with Wallin.

Hearn will have to be the one that dangles a carrot in front of Whyte’s face, telling him that if he wants to get that second payday against AJ, he must face Wallin. Without Hearn putting fear in Whyte, he’ll likely just sit and wait on the Joshua rematch in July.