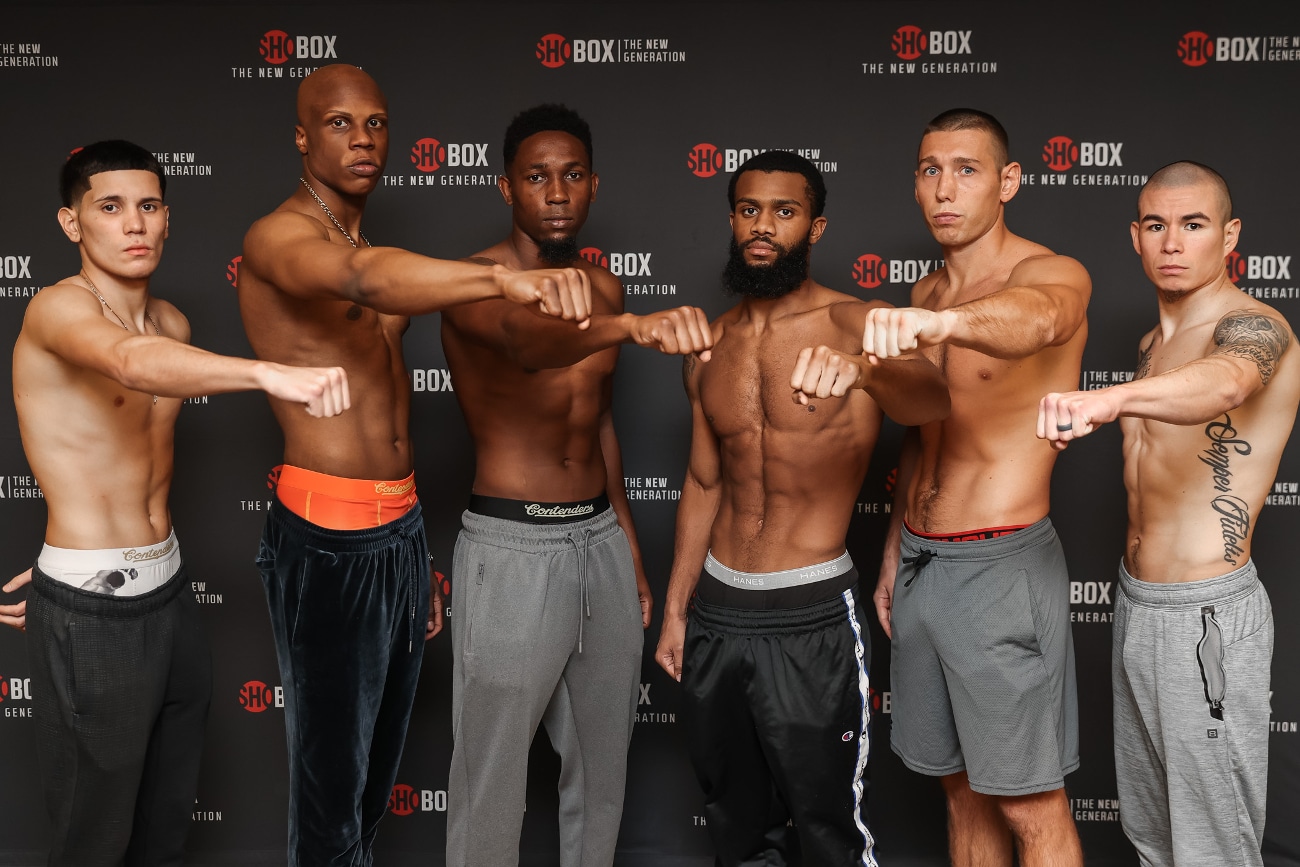 By Ken Hissner: At Wind Creek Events Center, Bethlehem, PA, Friday over ShoBox Marshall Kauffman (Kings Promotions) presented in the Main Event unbeaten Super Middleweights Sean “Silky” Hemphill and David Stevens as Stevens finished Hemphill off with a pair of knockdowns in the eighth and final round.

In the first round, the taller Hemphill countered well with a good jab against the ever-coming Stevens, who follows, not landing enough punches.

Hemphill landed a combination at the bell. In the second round, Hemphill continues outboxing Stevens, who loads up too much. With half a minute remaining, Stevens landed a right and left on the chin of Hemphill.

In the third round, Stevens opened with a right on the chin of Hemphill. He continued putting on the pressure, and outworking Hemphill.

In the fourth round, Stevens continued chasing Hemphill for the first two minutes before Hemphill finally started throwing punches in return. Stevens ended the round with a flurry.

At the fifth round halfway point, Stevens lost his mouthpiece from a Hemphill right. Stevens came back and drove Hemphill into a corner. Hemphill worked his way out, landing four straight jabs.

A good left hook to the body from Stevens stopped Hemphill in his tracks.

In the sixth round, Steven’s left shoe’s sole was loose. Halfway through the round, both were throwing bombs at one another with a Stevens right on the chin rocked Hemphill. They ended the round slugging it out.

In the seventh round, Hemphill started bleeding from the mouth from Stevens rights. Hemphill started out landing Stevens halfway through the round with right uppercuts and solid jabs as Stevens seemed to be slowing down.

In the eighth and final round, Stevens landed a flurry of punches after a minute of having Hemphill in a corner. With a minute remaining, it was Hemphill landing a left hook to the chin of Stevens.

With half a minute remaining, a left hook from Stevens on the chin and down went Hemphill for an eight count from Referee Shawn Clark. Upon rising, Stevens was all over him, dropping Hemphill again with a right and left combination when referee Clark called a halt without a count as Hemphill was falling to the canvas.

All three judges had Stevens up 68-65 after seven rounds, while this writer had Hemphill up by a round.

In the first round, Brusov was the aggressor but was cut on the right eyelid from a clash of heads halfway through the round. The much taller southpaw Oberlton used an effective jab in a competitive round.

In the second round, Oberlton re-opened the cut of Brusov’s a minute into the round in having a good round. Brusov’s left side of his head has a good size lump.

In the third round, Oberlton became the aggressor, landing left uppercut body shots along with a power jab.

In the fourth round, Brusov was walking into counterpunches from Oberlton. Through four rounds, Oberlton has control in all but the first round.

In the fifth round, Oberlton knocks down jabs of Brusov and counters well. With a minute remaining, Brusov landed his best punch, a left hook to the chin of Oberlton.

In the sixth round, Brusov was developing a mouse under his right eye from the jabs of Oberlton. Referee Eric Dali again warned Oberlton for hitting behind the head.

In the seventh round, Oberlton is picking up the pace, landing one punch after another, looking for a stoppage though Brusov lands an occasional overhand right to the chin, knowing he needs a knockout to win.

In the eighth and final rounds final minute Oberlton suffered a cut over his left eye due to a clash of heads. Oberlton impressed in this one, with Brusov landing the final punch of the round, a right on the chin.

In the first round, with a minute remaining, Gonzalez drove Morales to the ropes with a flurry. With seconds to go, a right from Gonzales on the chin and down went Morales on his back. He barely beat the count from Referee Shawn Clark being saved by the bell.

In the second round, Gonzalez drew blood from the nose of Morales though Morales came back well from the first round’s knockdown.

In the third round, Gonzalez landed three rights on the chin of Morales, who was holding when Referee Clark suddenly prematurely called a halt.

In the first round, Oran had Haywood badly hurt, causing a stoppage by Referee Shawn Clark.