Deebo Samuel dazzles on and off the field 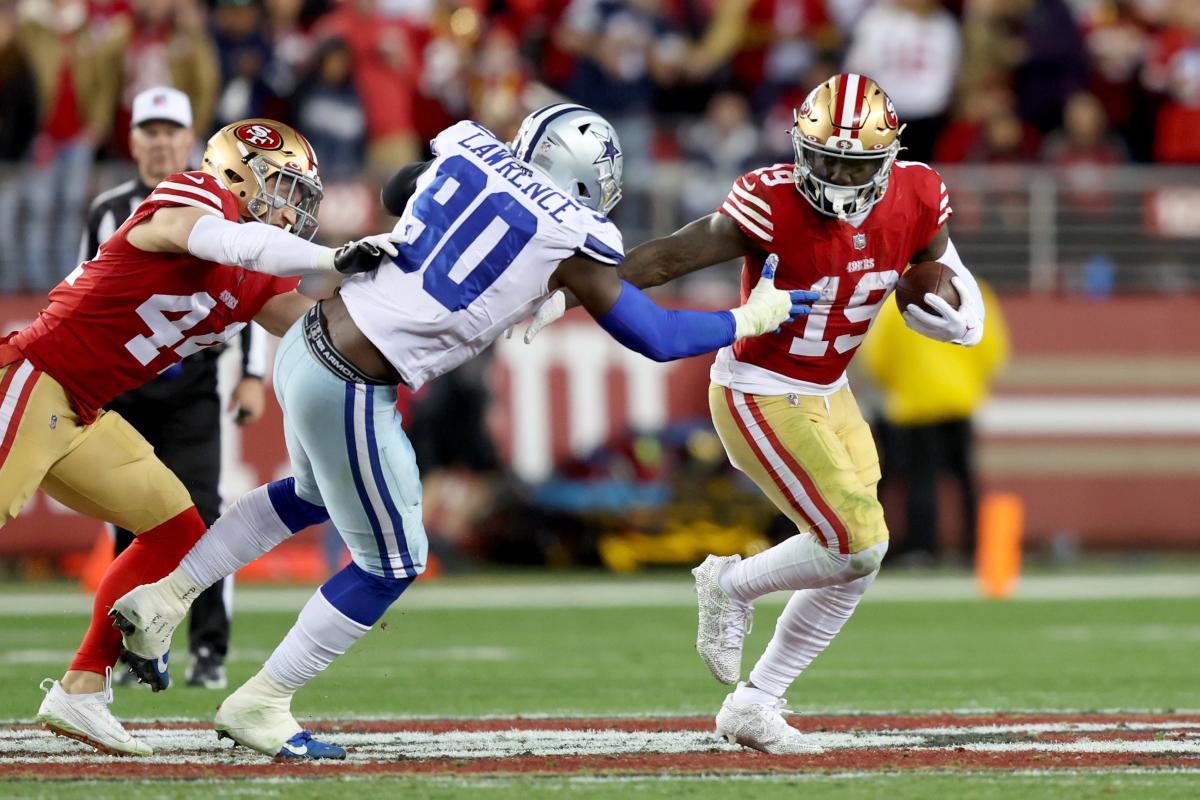 The Philadelphia Eagles and Kansas City Chiefs won in style in the NFL divisional round as they broke a four-game losing streak for No. 1 seeds in the playoffs.

They will host the San Francisco 49ers and Cincinnati Bengals, respectively, who are both playing with a chip on their shoulder.

On the field, Eagles quarterback Jalen Hurts broke out his Jordan XI Concord cleats and scored three touchdowns in Philadelphia’s 38-7 thrashing of the New York Giants. The MVP candidate also wore the cleats in Week 12 in a win over the Green Bay Packers as he continues to establish himself as elite on and off the field.

His teammate George Kittle also joined in on the fun and rocked a pair of custom Air Jordan 1-inspired cleats with his team colors in fun prints designed by The Shoe Surgeon.

There was clearly some heat on the field. Now let’s count down the best off-the-field looks.

Former drip check winner Marquez Valdes-Scantling returns to the list with this colorful outfit. The wide receiver wore a red and black leather motorcycle jacket from INTL Collective and matched it with a pair of checkerboard pants. The accessories, a Prada bucket hat and a pair of Travis Scott Air Jordan 1s with mismatched laces, elevated the look.

Saquon Barkley showed up to his game in head-to-toe Bottega Veneta. Stylist Joshua McPhearson curated a look that featured a black wool jacket with white trousers and textured boots. Louis Vuitton shades kept the running back cool and focused.

DeVonta Smith looks dapper pretty much every single week. Some of his suit choices stand out more than others, like this bold burnt orange one, and his divisional round selection definitely made the list. He wore a red and black striped suit with a red sash for that special sauce.

Frank Clark looked fresh in this purple ensemble. He wore a Louis Vuitton varsity jacket from Virgil Abloh’s last collection. The yellow and green accents complemented his textured purple pants from Tokyo-based repurposing company Proleta Re Art. He finished off the look with a pair of Timberland boots with purple laces.

Not only did Deebo Samuel impress on the gridiron, he made a statement before he even stepped on it. The wide receiver showed up to his divisional round game looking fierce in a black Gucci suit. Stylist Vick Michel topped it off with black gloves and boots.

It was a true statement look that had to take the top spot.