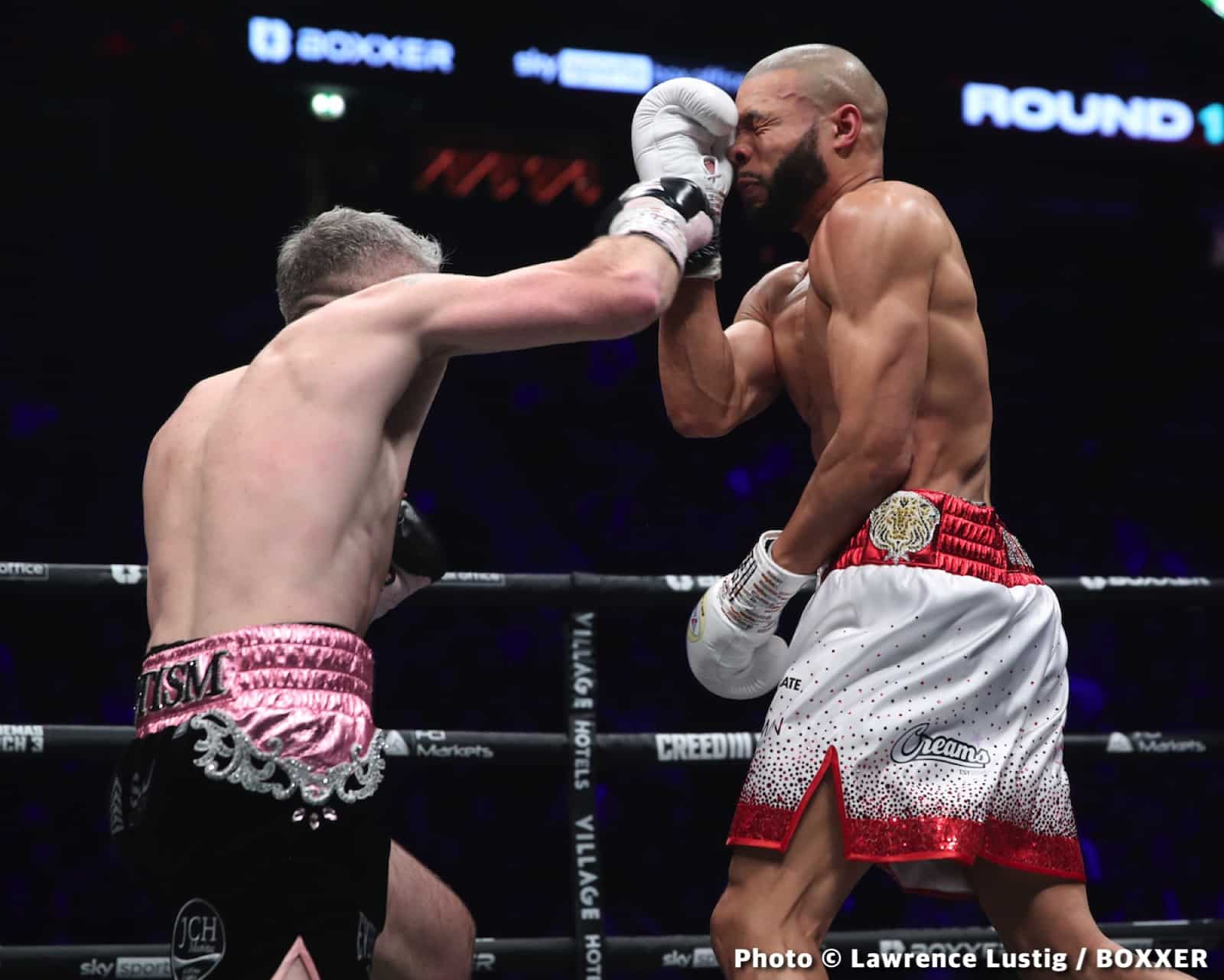 By Kieran O’Sullivan: If rumor were a river, would anyone find its source? The topography is vague, the maps suspect. You could get lost out there just looking.

But everybody knows that what begins as a vague whisper often ends in a rumor river at high flood.

A rumor is abroad. On the far-flung periphery of the boxing community, some lone and hardy online bloggers whisper it in the digital shadows: did Liam Smith cheat against Eubank Jr?

Now before you all throw your toys out of the pram, let’s deal with the basic fact Eubank Jr got his arse handed to him on Saturday night at the Manchester AO Arena. It was a thorough shellacking. A beat down. Smith went in there and did the business. Job done.

Well, rumor has it…

In the build-up to the fight, Eubank Jr taunted Smith, accusing him of being a ‘dirty fighter’ who uses his elbows and head to gain an unfair advantage. Along with all the crude verbiage exchanged – the homophobic slurs, the marriage slanders – Eubank’s fight-specific accusations got lost in the ugly mill. Smith laughed and denied he is a dirty fighter. Eubank cooly smiled, a cocky, ‘you know what I know.’

But what do we know? Can we look at the fight with a calm, objective eye devoid of bias and prejudice?

What The Joker Saw

A peripheral blogger who goes by the improbable online moniker JokerfleckCast recently posted a thirty-eight-second YouTube video that has garnered nearly forty thousand views. In the video, we see Eubank Jr backed into the corner; Smith throws what looks like a legitimate left hook which appears, on close viewing, to be a deliberate elbow. Vicious. Thrown with intent.

Or not. It’s a fight – protect yourself at all times. Liam throws a left hook. Eubank ducks. Too late. Gets tagged.

Exhibit A: The Muay Thai Elbow?

Anyone who has watched those men of steel, the Muay Thai fighters, will know how a skilled Thai fighter will often disguise an elbow as a hook. When they land correctly, these elbow shots are devastating: all that muscled poundage and sinewed leverage becomes concentrated at the sharp end of a bony elbow – it’s a hard game.

But with different rules.

Backed into the corner, under fire, Eubank ducks as Liam Smith throws a left hook.

And then something strange happens.

Under the brute force of the blow, Eubank’s legs dip, thereby opening him up to a combined assault straight out of the copybook.

The result? A broken Eubank staggering across the ring, his career in ruins.

Post-fight, everyone could see the damage in the shape of a huge welt mushrooming beneath Eubank’s right eye. Unusual, to say the least.

Almost as if Eubank Jr had been illegally bludgeoned with a bony elbow thrown full force?

Liam Smith, a super welterweight climbing up the ranks to middleweight, managed to do what no one else has ever done to Eubank Jr.

Yeah, he put him down – we all know that.

Yet somehow, the former super welterweight administered a super welt rarely seen in the ring, let alone against a hard man like Eubank.

“All boxers! Avoid Roy Jones Jr as a trainer! Never mind this elbow. Just avoid him. Damn, If I can take all that away from a fighter via training, no wonder I raised so much hell in my day! That almost sounds like Godly qualities, And I’m nowhere near what God is!”

In one line, we see the shaping of a rematch narrative. Currently, the rumor is at low tide, but soon we may witness the flood as Eubank Jr, and his legendary trainer put it on Liam Smith at press conferences to come.

We haven’t heard the last of this.

Ladies And Gentlemen Of The Jury – Arise

Now it’s over to you, the jury. You’ve heard the arguments.

Is Liam Smith a man of honor who won the contest within the rules proving to all who watched that he is the better man?

Or is Eubank Jr the victim of an illegal, calculated assault, an assault shredding both reputation and honor, leaving him to count the cost of a broken career?